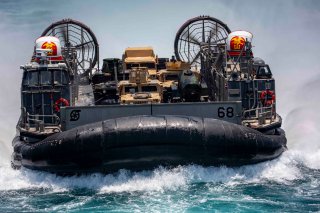 “LCACs are built with similar configurations, dimensions, and clearances to the legacy LCAC, ensuring the compatibility of this next-generation air cushion vehicle with existing well deck-equipped amphibious ships. The LCAC program is currently in serial production on LCACs 105 – 116 at Textron Systems,” a report from Naval Sea Systems Command said.

The Navy’s seventy-two existing LCACs, in service since the 1980s, can only transport up to sixty tons, reach speeds of thirty-six knots and travel 200 nautical miles from amphibious vehicles, Navy officials explained. The new LCACs build upon and upgrade the mission long-performed by the originals. Textron engineers told the National Interest that the new SSC is built with digital flight controls and computer automation to replace the traditional yoke and pedals used by current connectors. As a result, onboard computers will be able to quickly calculate relevant details, such as wind speed and navigational information.

The new SSCs also have a lower frequency for ship electronics, moving from 400 Hertz down to 60 Hertz in order to better synchronize ship systems with the Navy’s common standards, Textron developers explained. Along with these properties, the new SSCs reduce the number of gear boxes from eight to two.

Since potential adversaries now have longer-range weapons, better sensors and targeting technologies, and computers with faster processing speeds, amphibious forces approaching the shore may need to disperse in order to make it harder for enemy forces to target them. This phenomenon, in which potential adversaries have advanced weaponry designed to make it harder for U.S. forces to operate in certain areas, is known by Pentagon officials as anti-access/area-denial (A2/AD).

It makes sense that the Navy would want to request more landing craft connectors, given that the service’s Distributed Maritime Operation strategy calls for faster-moving, disaggregated, and highly networked operations across wider areas. This makes forces less condensed or concentrated, therefore reducing their vulnerability to enemy fire and greatly increasing their ability to reinforce a beachhead amphibious landing.

Amphibious assaults are one way to overcome this A2/AD strategy, as they can contribute to an integrated air-sea-surface-undersea attack campaign designed to penetrate enemy defenses. Once an enemy coastline or perimeter has been penetrated, the new SSC LCACs could transport Marines, weapons, supplies, and even heavily-armored vehicles to the shore.