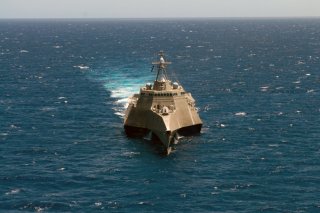 The Navy’s ongoing surge to arm its surface fleet with up-gunned mine-hunting, submarine-attacking Littoral Combat Ships (LCS) is quietly surging along beneath the radar of a large variety of pressing Navy topics. These ships are to be armed with guns, drones, mini-sub-hunting undersea drones, and new over-the-horizon missiles.

However, the service is maintaining an ambitious production pace of new Independence-variant LCS ships. One Navy report says such a shipbuilding pace has not existed since the 1990s.  The Navy recently completed acceptance trials for its LCS 28 in the Gulf of Mexico, a series of combat-preparation steps which includes testing the ship’s propulsion, electrical systems, maneuverability, and “combat system detect-to-engage sequence,” according to a Navy report.

The report also says the LCS is now the Navy’s second-largest surface ship class in production, behind the DDG-51 Arleigh Burke-class destroyer program. Deliveries in recent years seem to affirm this pace, as three LCS ships were delivered in 2019, four in 2020, and the Navy is on track to deliver four this year as well.

Of course, the Navy’s ambition to deploy a larger surface fleet is well established, so a high tempo for LCS production is not a surprise per se, yet there is another interesting element to the equation which might easily be overlooked: Russian corvettes.  A larger and well-armed surface fleet of Navy LCS ships, able to drop sonar, launch drones to hunt submarines, shoot deck-mounted guns, and even fire Raytheon’s over-the-horizon longer-range Naval Strike Missile, can introduce previously unavailable tactical options for Maritime Commanders in high-risk coastal areas.

A quick look at globalfirepower.com reveals that Russia operates as many as 85 corvettes, compared with only 21 for the U.S. These kinds of faster, armed, shallow-water attack boats can conduct coastal patrols and reach strategically vital areas for submarine hunting and mine sweeping less accessible to deeper draft ships. They can also transport special ops, conduct reconnaissance missions and even perform certain kinds of land-attack or small-boat hit and run operations. Added to this equation is the fact that Russia is test-firing its new corvettes in the Pacific, an area filled with islands, extended areas of coastline, ports, and shallow water flashpoints.

A report last year published by Russia’s TASS news agency cites a live-fire exercise in the Pacific with its latest Project 20380 Corvette, firing artillery and launching an Uran cruise missile against targets 40km away.

The Project 20380 third corvette is designed to accomplish green-water missions, fight enemy surface ships and submarines and provide artillery support for amphibious assault operations. In addition, they are armed with multi-purpose artillery guns, surface-to-air missile/artillery systems, supersonic missiles, and automatic artillery launchers; they carry a Ka-27 helicopter, displace 2,200 tonnes, and have a crew of 99, TASS reported. The new corvette also tested its air defense weapons during Sea Trials in the Sea of Japan as part of the effort to fire off artillery at coastal targets.

Also interestingly, the Russian TASS report makes reference to the stealth properties of the corvette, stating that its construction is incorporating “radio absorption materials and specially designing the ship’s hull and superstructure.” A quick look at the ship's configuration confirms this as it appears to have a rounded bow and smooth, curved exterior, part of an apparent effort to minimize the return signal generated back to radar systems seeking to locate or target the ship.