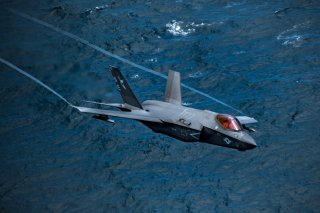 The Next Generation Air Defense platform will likely be the world’s stealthiest, most advanced fighter ever. But there’s not much info about it.

The U.S. Navy is not releasing funding details about the Next Generation Air Dominance platform, opting instead to keep the program’s financials under wraps. The classification strategy is intended to keep any information about the program that could be compromised by releasing budget figures away from public view.

“Although NGAD is a classified line, investments do go up over the [Future Years Defense Program] somewhat dramatically for NGAD,” Rear Adm. John Gumbleton, the U.S. Navy’s Deputy Assistant Secretary for Budget, explained to reporters during a Monday briefing.

He also explained that “our folks on the Hill who monitor this program and approve those budgets are read into these programs and they have full access to understand what we’re requesting and what they cost.”

“Bottom line is we see a threat out there that requires capabilities that we do not currently possess, from signature and speed and range capabilities. And so the sixth-generation program is built to solve those problems,” Rear Adm. Andrew Loiselle, the Director of the Navy’s Air Warfare Division, explained to USNI News late last year.

And while the Next Generation Air Dominance platform is a highly classified program, Gumbleton could not specify if or for how long it would remain that way.

“I can’t really answer that question. I don’t have a number,” he said. But, he explained, “I would anticipate it’s going to be highly classified for quite some time.”

Highly classified programs are not unknown to the Pentagon. Take the F-35 Lightning II fighter, for example, which remained classified for years. The Navy is aiming to bring the Next Generation Air Dominance platform into service sometime in the 2030s. At that point, the platform could take over for the Navy’s aging F/A-18 Super Hornets and their electronic warfare Growler counterparts, though it is unclear if the NGAD program is moving according to schedule.

The Navy also has another significant program in the development pipeline that remains classified. The Next-Generation Destroyer, or DDG(X), program would ultimately replace the U.S. Navy’s aging Arleigh Burke-class destroyers.

In addition, the U.S. Navy is moving along with the SSN(X) submarine program, an attack submarine that will come after the Navy’s Virginia-class subs. The Navy has set aside over $400 million in funding for research and development for both programs.