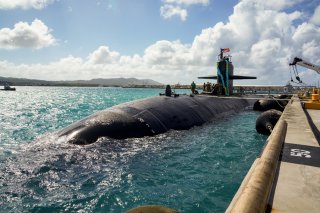 The U.S. Navy released a report covering what exactly went wrong when the USS Connecticut struck something while underway in the South China Sea in October of last year. Though the report is heavily redacted, it gives a broad overview of what happened.

The report explained that the submarine had been conducting a humanitarian evacuation en route to Okinawa, one of the Japanese islands, at the time of the incident. These types of evacuations can cover a broad range of incidents, including the death of a crew member’s family member and non-emergency medical care that cannot be addressed while on the submarine, and are considered relatively routine.

The U.S. Navy report explained that the "Connecticut grounded on an uncharted bathymetric feature while operating submerged in a poorly surveyed area in international waters. This mishap was preventable.”

Photos surfaced online following the incident and showed that the submarine’s front portion, typically where the submarine’s large sonar array is in position, had been shorn off. After the collision, the submarine was able to make it back to Guam for basic repairs before sailing further to San Diego for proper repairs and an overhaul.

“In implementing these significant improvements, the Navy will become a more effective fighting force,” the U.S. Navy statement announcing the release explained.

The report also explained that the collision "resulted from an accumulation of errors and omissions in navigation planning, watchteam execution, and risk management that fell far below U.S. Navy standards."

It adds that "prudent decision-making and adherence to required procedures in any of these three areas could have prevented the grounding."

The Navy also explained that overall, the investigation “promulgates lessons learned, memorializes completed corrective actions, documents accountability actions, and delineates pending actions that must be finalized with a sense of urgency.”

“In addition to addressing the unit-level errors that caused the grounding, the investigation highlighted specific areas for improvement in the deployment training and certification process – and the Navy is urgently implementing these improvements across the Submarine Force. This investigation delineates 28 corrective actions, of which 14 actions are complete, 13 actions are in progress, and 1 action is enduring.”

The Navy was understandably displeased with the accident and took disciplinary action against several of the ship's crew, and likely updated its own and allies' documents about the specific location and nature of the underwater feature that the submarine struck.