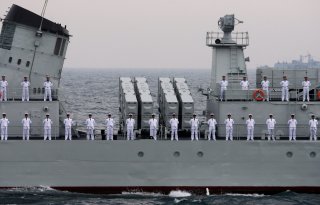 “Today, the People’s Liberation Army Navy (PLAN) is the largest fleet in the world, with around 350 ships... For the first time since the defeat of the Soviet Union, we have a strategic competitor with naval capabilities and capacities that rival, and in some areas, surpass, our own,” Del Toro said, according to a transcript of his remarks.

While many details about just how advanced China’s weapons are and how many of them are operational in sufficient numbers are not available, many may wonder if the PLAN could, in fact, outmatch the U.S. Navy.

“Our job is to preserve the peace by making sure the People’s Republic of China doesn’t gain military leverage over the United States, or our allies and partners,” Del Toro explained.

Just how possible or realistic is this idea of China’s Navy having a tactical and military “overmatch” or superiority compared to the U.S. Navy?  Some of the answers may not be “knowable” in many respects. Yet there are some measurable realities that might not guarantee Chinese superiority. One clear fact is the power-projection of the U.S. naval force which operates as many as ten or more aircraft carriers, whereas China is just now emerging with its second and third. It will take many years for China to have the ability to project forward global power the way the United States can.

Perhaps most importantly, merely having a higher number of ships will not in any way guarantee that those ships, or the combat employments of those ships, would be sufficient to truly rival the fast-improving U.S. Navy force. Pure ship numbers might not be as critical as the pace of information inflow, sensor, and weapons ranges and precision, progress with AI, and secure data sharing. The exact extent or capacity of Chinese technological Naval sophistication may not be fully understood or known. But Del Toro does make a point to highlight well-documented technological advancements and even breakthroughs in key weapons development areas such as AI-enabled algorithms, cyber warfare, and anti-satellite weapons.

“We must act with urgency now as we rise to meet these unprecedented challenges. It’s this sense of urgency that’s the driving force behind the strategic guidance that I am about to release this week for the Department of the Navy,” Del Toro said.