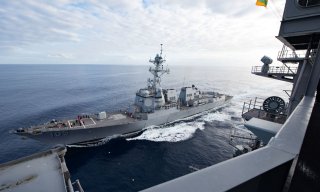 U.S. Navy weapons developers are examining innovative methods of consolidating electrical power onboard ships to fuel the next generation of naval weapons, sensors, and computing systems. Naturally, much of this relies on enabling the continuous production and storage of power onboard ships that are now being built with newer, more advanced technologies. Destroyers, for example, are armed with lasers, longer-range sensors, more sensitive radar systems, and more elaborate networking and computing systems, all of which require electricity and the efficient distribution of energy.

With this in mind, the Navy now has many systems and research efforts in progress in order to optimize ship power development. Crucially, this will depend on finding the right blend of size, weight, and power (SWaP). In order to achieve this, Navy weapons developers hope to build a much smaller and more efficient hardware footprint to maximize the available space onboard the Navy’s ships. This can largely be achieved through the application of common hardware and software standards and new technologies specifically designed to generate, store, and distribute electrical power.

These technologies, and the concepts of operation associated with them, continue to be defining elements of the Navy’s DDG 51 Flight III destroyer program and the emerging DDG(X) effort.

Of particular importance is the Integrated Power and Energy Systems (IPES) effort, which seeks to integrate promising, combat-ready systems with breakthrough technologies capable of paradigm-changing methods of energy storage and distribution. IPES is designed to maximize performance in the near and long term, while also greatly reducing the risks typically associated with longer-term developmental programs.

Northrop Grumman’s strategy, developers explain, is to offer technologies and architectures fully aligned with the Navy’s approach to these ships, an effort that involves a blend of new innovations and upgradeable, cutting-edge systems currently in use.

“We have an architecture in place that can support current and future weapons and sensor systems that are a key piece of DDG(X). We are in a position now to put this in the DDG(X) platform,” Matthew Superczynski, chief engineer for Northrop Grumman’s Power and Control Systems division, told the National Interest in an interview.