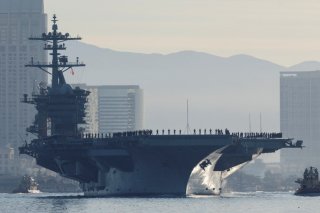 One project that the Navy is particularly focused on is the Integrated Power and Energy Systems (IPES), a ship-integrated energy system intended to allow Navy ships to accommodate a new generation of weapons and technology.

Northrop Grumman, the defense company developing the IPES, is attempting to maximize output and performance while still ensuring effective storage, maintenance, and distribution. With IPES, ship sensors, computers, radars, and directed energy weapons can all be supported by a single, highly efficient architecture that is flexible enough to address changing load demands.

A valuable 2017 research paper supported by the Office of Naval Research clearly identifies the problems and challenges that IPES is engineered to solve. The authors note that operating electrical weapons such as rail guns “may exceed the ship's generators in terms of power ramp rate, which may drive the system to instability.”

Therefore, the kind of breakthrough enabled by IPES could be critical for current and future ships. It will also greatly benefit the Navy’s growing fleet of autonomous systems. For example, the unmanned surface vehicles currently being developed by the Navy will require unprecedented levels of energy management and sustainability to support their high-endurance missions.

One notable advantage of this technology is an increased ability to network systems such as laser weapons through a common power source in order to optimize output efficiency. As a result, ships will have the systems necessary to sustain next-generation counter-drone technology and integrated air defense systems.