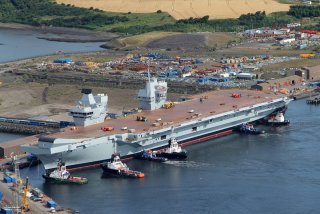 The Royal Navy's new flagship HMS Queen Elizabeth finally set sail on Monday from Portsmouth after four postponements earlier this year due to an outbreak of the novel coronavirus among its crew as well as bad weather. The new £3.1 billion 65,000 ton aircraft carrier will take part in Exercise Joint Warrior off the coast of Scotland with Royal Air Force (RAF) and U.S. Air Force F-35B Lightning II fighter jets as well as several other British warships, a U.S. Navy destroyer and Dutch Navy frigate.

This exercise is a chance for the crew to develop the skills to work with personnel from other nations, the British Ministry of Defence said in a statement.

HMS Queen Elizabeth, which is the first carrier operated by Great Britain's Royal Navy since the HMS Ark Royal was decommissioned in 2011, will also have the largest group of aircraft on a Royal Navy warship since HMS Hermes was in commission. She had been under a state of quarantine in recent months to stop the spread of Covid-19. Two previous departures, one in April and the second in September, were cancelled after a small number of crew members tested positive for Covid-19.

Yet after months of delays, she was underway on Monday. Six super-powered tugs helped guide the 900 foot long Royal Navy carrier out of port on a nearly cloudless day as hundreds lined the coast to watch her departure.

"Big Lizzie," as the warship is known fondly to her 1,700 crewmembers, will travel to the North Sea to take part in training drills with around a dozen new vertical and/or short take-off and landing (V/STOL) F-35B fighter jets from the 617 Squadron "Dambusters." An additional 10 F-35Bs from the United States Marine Fighter Attack (VMFA) Squadron 211 "The Wake Island Avengers" were training alongside the Dambusters in recent weeks.

The British and American F-35s will further conduct carrier qualification training from HMS Queen Elizabeth, to prepare pilots for day and night operations, as well as weapons training.

The carrier can support a total of thirty-six of the Lockheed Martin-built fifth-generation stealth fighters. The carrier is able to launch twenty-four of the aircraft in just five minutes, and has a maximum recovery rate of twenty-four aircraft in as many minutes.

In addition to carrying what has been described as the most dominant fifth-generation jet fighter in service today, the carrier's air wing is also composed of nine anti-submarine Merlin HM2 medium-lift naval helicopters along with four or five Merlin choppers for airborne early warning missions.  For land operations, the carrier can also carry a mix of other helicopters including the CH-47 Chinook, AH-64 Apache, Merlin HC4, and Wildcat HM2.

While Big Lizzie is still undergoing training exercises, the carrier will make its official "maiden voyage" next year. It will be a grand voyage at that as the Royal Navy's flagship will head to the Far East, which is notable as the Royal Navy hasn't had a permanent military or naval presence "East of Suez" since the early days of the Cold War.