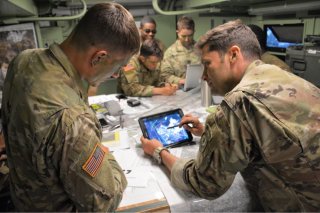 The Army is engineering and upgrading a small hand-held device called Nett Warrior able to give soldiers time-sensitive combat data in real-time. An upgraded Nett Warrior device, or something similar to it, will ideally help the Army gather, organize, and share incoming input from otherwise incompatible formats and standards.

An enemy drone or groups of maneuvering fighters approaching for attack from beyond the radar horizon might not be detected through line-of-sight radio frequency (RF) signals or radar fields of view. A surveillance plane, aerial drone node, satellite, or fighter jet might detect the threat and be positioned to relay the information to individual soldiers on the ground. A Switzerland-based military innovator called the Fischer Connector Group is building a small, wearable soldier device intended to expedite this process. It's called the Wearable Tactical Next-Generation Hub, and it is engineered to gather all of this incoming data and enable real-time exchanges, comparisons, data transfer, or AI-enabled analysis.

A Fischer report describes this in terms of a “huge torrent of available information pouring over commanders in a continuous wave. How will all of this information reach commanders in time to be useful?”  This is the fundamental objective of the hub.

AI is fundamental to this entire process. As it can gather large volumes of information, perform analytics to bounce off of a seemingly limitless database to solve problems, analyze data and recommend solutions.

How might a fighter jet's radio or RF data link connect or merge with incoming video feeds from drones also in position to detect the enemy aircraft? What if RF datalink functions are on different frequencies? Resolving or smoothing through incompatible communications formats is the underlying technical ambition of the Fischer Connector Group’s “hub” as it seeks to organize, compare and display all of this kind of data on a single hand-held screen for the individual soldier. In this and other respects, the Fischer Connector Group’s “hub” aligns with the tactical, strategic and technological aims of the Army’s Project Convergence. This is done by architecting systems with common standards, using “gateways” devices such as Fishcer’s “hub” to receive and transmit in multiple frequencies and formats, enabling communication from otherwise incompatible communication technologies. Information can arrive through GPS or RF, be translated through Fischer’s connector “hub,” and then exit or transmit through a different communications modality or transport layer.

“The notion of convergence is taking sensors from multiple services and multiple units and tying them to some type of command and control capability using artificial intelligence to move data very quickly,” Gen. John Murray, Commanding General of the Army Futures Command, said at an event following Project Convergence 21.

Once the incoming data arrives and is pooled, it can be organized, analyzed, and processed by AI-empowered computer algorithms performing millions of functions each second. As Murray mentioned, this speed is made possible in large measure through AI. Moments of relevance can instantly be found amid limitless volumes of information, bounced off a large database consisting of a compiled library including detail about previous scenarios and threat specifics, to perform near real-time analytics and identify potential solutions or courses of action for human decision-makers.