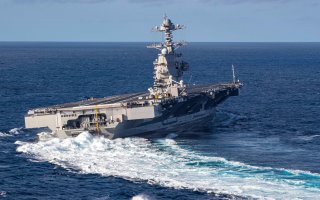 U.S. Navy developers of the emerging USS Gerald R. Ford are making extensive efforts to ensure the new class of carriers is positioned to fend off an entirely new generation of enemy attacks expected to greatly challenge the boundaries of ship defense.

During final parts of the Navy’s now complete 18-month Post Delivery Test and Trials phase for the Ford, an 18-month war preparation, Ford crew members were asked to fend off high-speed incoming attacks such as incoming rockets, attack drones, small boat approaches, and other kinds of anticipated threats likely to inform any major confrontation with great-power adversaries.

The realities of these kinds of threats are a key element of several variables related to better arming carriers and developing them in a more deliberate and focused way as “warships.”

The carriers of tomorrow may not be called upon to simply support air attack missions in a combat environment where maritime and air supremacy are assured. Instead, carriers themselves will need to defend against major power attacks and confront a new sphere of highly sophisticated enemy weapons systems and methods of attack. Incoming enemy anti-ship missiles, attacks from aircraft, small boat threats, and drone boat attacks are all contingencies carriers may independently need to address to a much greater degree, as they may operate within Carrier Strike Groups to a lesser degree.

The Navy’s development of its Ford-class, particularly with regard to the rigor of its weapons testing and preparation,  seems to reflect the service’s prioritized need to prepare carriers for more direct maritime warfare engagements.

During the weapons testing and development phases, the Navy put its carrier defenses through an intense set of tests against advanced and highly lethal enemy weapons systems. Ford crew members fired RIM-116 missiles, sea sparrow missiles, and rounds from the Mk-15 Phalanx Close-in Weapon System during testing, a Navy report said. The CIWS is a particularly relevant and interesting weapon, as it can fire as many as 4,500 rounds per minute to disable, derail or destroy approaching enemy attacks.

Also, given that the Ford-class will be expected to sustain a higher sortie rate than previous carriers due to its larger flight deck capacity and electromagnetic catapult, the combat preparations included massive efforts to conduct take-offs, landings and fighter-jet air attacks from the ship.