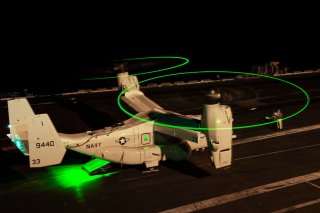 “With distributed maritime ops, longer ranges, distances between multi-carrier operations, distances from land-based areas, and the ability for the CMV- 22B to plop down on unimproved spaces, it proved to be a game-changer for us on deployment,” Vice Admiral Kenneth Whitesell, the commander of Naval Air Forces (NAVAIR) and Naval Air Force, U.S. Pacific Fleet, said during a Maritime Security Dialogue event on Wednesday.

The CMV-22B replaces the Navy’s aging C-2A Greyhound transport carrier-onboard-delivery aircraft. Though the Greyhound is capable of carrier landings, it cannot be refueled from the air and has been in service since the 1960s.

By nature of its helicopter-like landing, the Osprey can conduct night landings on aircraft carriers more easily than the Greyhound, which is also an asset to rapid landing, unloading, reloading, and takeoff procedures.

The Osprey has the “ability to get it on and off the deck In a rather rapid fashion,” Vice Admiral Whitesell said. “I don't have to clean catapults three and four and land to [carrier onboard delivery] COD. I can now land it just like a helicopter. I can reposition it. As soon as it offloads, or prior to onload, I can take it back into starboard delta [holding pattern].”

“This past summer marked the first deployment for the CMV-22B. Fleet Logistics Multi-Mission Squadron (VRM) 30 embarked on the USS Carl Vinson (CVN 70) alongside the F-35C Lightning II and E-2D Advanced Hawkeye squadrons,” a press release from the U.S. Navy in February explained.

“The first deployed detachment has executed a mission completion rate of 98% and a mission capable rate of 75%. The CMV-22B is a crucial element of future carrier airwings due to the cargo capacity needed to transport F-35 power modules and additional logistics support for future carrier air wing deployments with next-generation platforms.”

Still, the CMV-22B offers higher readiness than its predecessor.

“For COD, you always have one in phased maintenance,” Vice Admiral Whitesell said, referencing a specialized Naval maintenance schedule.