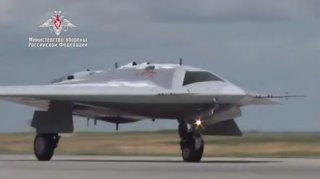 "In order to control advanced Okhotnik drones, a two-seat command variant of Su-57 will be created,” a defense industry insider source told TASS. “The fighter jet, already in development, is presumed to control about four Okhtonik drones," the source added.

On its face, the new report leaves little room for ambiguity: only a special, two-seat “command variant” of the Su-57 fifth-generation fighter will be able to control Okhotnik drones. But the devil, as always, is in the details. The first and most obvious caveat is that TASS, by its own admission, could not independently confirm this report. TASS is a leading state news outlet with a well-established track record of accuracy when it comes to Russia’s defense industry, but the report should still be treated as unconfirmed in the absence of corroborating information from official sources.

The brief statement provided to TASS is vague on several key points.  It remains unclear if this was the plan all along, or if Sukhoi was compelled to manufacture the “command variant” only after discovering that the single-seat Su-57 model cannot accommodate the drone. This raises a separate, but no less important question: is the standard, single-seat Su-57 incapable of operating any Okhotnik drones at all? The wording of the report suggests, but does not conclusively affirm, that this is the case. There is still a distant possibility that the standard single-seater Su-57 could control several Okhotnik drones as loyal wingmen, while the “command version” could be specifically configured to handle a swarm of four drones.

Deputy Prime Minister Yuri Borisov said earlier this summer that the Su-57 will be getting a two-seat version, which would make it the world’s first two-seat fifth-generation fighter. But the announcement made no mention of drones. According to Russian defense conglomerate and Sukhoi parent company Rostec, this two-seater is being built primarily as a trainer for foreign markets.  "This plane can be in demand in flight personnel’s training to lower the psychological stress of inexperienced pilots, and also to perform lengthy flights over featureless terrain," read a Rostec press statement. Borisov explicitly noted in June that the two-seater is an “export configuration,” but this new “command variant” will apparently be used by Russia’s air force. There are enough substantive differences here to imply that there could be more than one two-seat variant of the Su-57, but it is too early to draw any definitive conclusions.

S-70 Okhotnik-B is a flying-wing, heavy stealth combat drone, first spotted alongside a Su-57 in 2019. The Okhotnik can carry out reconnaissance and surveillance missions, leveraging its onboard sensors to feed its Su-57 mothership battlefield information through datalink. It can also reportedly strike targets with an internally stored payload, though the full extent of its weapons loadout remains unclear.

There is currently one flyable Okhotnik prototype, with three more in production and slated to undergo testing through 2023. The first Okhotnik-B units will reportedly enter service starting in 2024.