Russian Su-57 Stealth Fighters Could Be Getting a Wingman 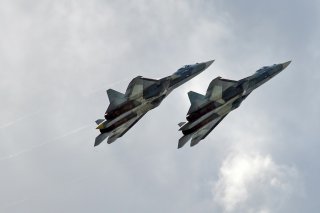 Less than a year after its introduction into service, Russia’s Su-57 fifth-generation fighter is getting a new version.

Deputy Prime Minister Yuri Borisov announced earlier this week that Russia’s defense industry plans to develop a two-seat Su-57. "There is interest in this aircraft and, in my view, it will grow with every passing year as our Russian Army is supplied with this model. Foreign customers at first look at how a particular weapon of the Russian Armed Forces operates,” Borisov said. “The Defense Ministry and the Sukhoi Design Bureau have plans to develop a two-pilot aircraft that will boost the export demand for this model … and it may create additional demand.”

But what practical benefits would a two-seater Su-57 bring? Two-seater variants were relatively common across 4th and 4+ generation fighters — notable examples from past decades include the Eurofighter Typhoon, F/A-18/E Super Hornet, and several F-15 models. In ground strike missions, the second seat could be used by a Weapons Systems Officer (WSO) whose job is to operate the plane’s targeting systems. Before the advent of glass cockpits and other contemporary avionics features, it also made sense to offload certain navigation and radar management tasks to a second crew member.

Newer avionics systems have streamlined and automated many of the features that would previously require constant human attention, rendering the second seat increasingly redundant in the context of modern airpower operations. This trend is further accentuated by the sophisticated integrations of artificial intelligence and machine learning found across fifth and sixth-generation fighters, executing tasks like target acquisition and information processing far more effectively than a second crew member ever could. One of the latest manifestations of this trend is the concept of the loyal wingman drone, operating in an automated fashion to feed the mother plane a steady stream of reconnaissance and targeting information.

As a fifth-generation fighter, the Su-57 supports many — if not all — of the contemporary features described above in one form or another. So, then, what’s the point of a two-seat variant? According to Rostec, the new model will be offered exclusively for export markets: "This plane can be in demand in flight personnel’s training to lower the psychological stress of inexperienced pilots, and also to perform lengthy flights over featureless terrain.” The goal, then, is to offer prospective import clients an advanced training platform with a robust operational range.

Borisov appeared to suggest that the two-seater can function as a preview model of sorts, designed to give foreign Air Forces a taste of what the Su-57 platform is capable of in a safe, simulated environment. It is meant to complement rather than replace the standard one-seater Su-57E export model that Russia is currently advertising to buyers around the world, potentially offering skeptical importers a greater sense of confidence in their purchase.