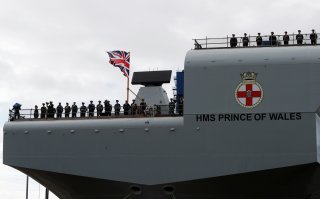 The crew of the Royal Navy's brand new aircraft carrier HMS Prince of Wales led the UK's national commemorations to mark the 75th anniversary of the victory over Japan and the end of the Second World War this past weekend at the National Memorial Arboretum in Staffordshire. While the Victory over Japan (VJ) Day commemorations were scaled back due to the coronavirus—much like the Victory in Europe (VE) Day events in May—this past weekend's event featured veterans, families and descendants of those who served in the Royal Navy during the war.

Prince Charles, the actual Prince of Wales, led a two-minute silence at the arboretum and laid a wreath at the Kwai Railway Memorial—a thirty-meter section of the actual railway track that was built by British prisoners of war (POWs) and fictionalized in the 1957 film The Bridge on the River Kwai. In his speech, Prince Charles said the veterans’ service “will echo through the ages.”

Saturday’s event included a rare appearance by Prince Philip, ninety-nine, who has only been seen a handful of times since retiring in 2017. As a young Royal Navy officer, Prince Phillip was aboard a warship in Tokyo Bay.

It has been estimated that there were seventy-one thousand British and Commonwealth causalities in the war against Japan, including more than twelve thousand POWs who died whilst in Japanese captivity.

Crewmembers of the HMS Prince of Wales were chosen to take part in the event to honor the battleship previously of the same name, which was among the first major losses of the Royal Navy in the war against Japan. Despite the fact that the warship carried eight fourteen-inch main guns and sixteen 5.25-inch dual-purpose guns as secondary armament and was among the most advanced battleships of the era, she was sunk on December 10, 1941, as she and battle-cruiser HMS Repulse attempted to stop the Japanese landings on the Malay Peninsula.

The third ship of the class, HMS Prince of Wales entered service in early 1941 and displaced thirty-five thousand tons. The warship transported British prime minister Winston Churchill to Newfoundland for a meeting with U.S. President Franklin Delano Roosevelt in the summer of 1941 and in October was dispatched to Singapore to counter the increasing threat to British possessions in the Far East. The two British warships, which were part of Force Z, were caught in the open sea by eighty-seven Japanese aircraft. Churchill called the loss of the vessels a greater blow to Allied sea power than the Pearl Harbor attack.

The new sixty-five thousand ton Queen Elizabeth-class aircraft carrier conducted sea trials earlier this year, but the HMS Prince of Wales (R09) was in the news in April for some unsettling reasons—namely its loud engines, which reportedly have kept residents of its homeport at Portsmouth Naval Base, Hants, up at night. While the issue has been resolved it wasn't an auspicious start for the latest warship to carry such a high profile moniker.