The New Special Relationship (Between the Royal Navy and U.S. Navy) 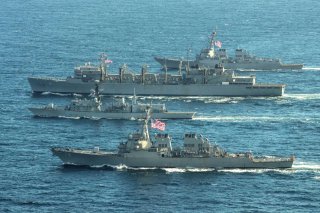 Since the Second World War, the United States and the United Kingdom have maintained the “special relationship,” but now the U.S. Navy and British Royal Navy could move even closer together in a very special naval relationship. The U.S. Navy’s Chief of Naval Operations (CNO) Adm. Mike Gilday and First Sea Lord Adm. Tony Radakin announced their intention to set a new cooperative vision for interchangeability, while aboard the Royal Navy’s new aircraft carrier HMS Queen Elizabeth.

“We will synchronize pioneering capabilities, strengthen operating concepts and focus our collective efforts to deliver combined sea power together,” said CNO Adm. Gilday on Tuesday during the virtual Atlantic Future Forum, which was being held on the Royal Navy’s new flagship. “By organizing our cooperation on carrier strike, underwater superiority, navy and marine integration and doubling down on future war fighting like unmanned and artificial intelligence, we will remain on the leading edge of great power competition.”

Under the plans, which were reported by Naval-Technology, the navies of the two longstanding allies will open a “tech bridge” in London that would be used to transfer and share innovation between the partners. It would follow in the footsteps of a concept that was pioneered in the United States at a dozen sites, where information and innovation is already being shared.

Gilday added that the trust between the U.S. and UK navies is “second-to-none,” and this announcement comes as the HMS Queen Elizabeth completed Exercise Joint Warrior, during which the carrier embarked F-35B Lightning II jet fighters from the Royal Air Force (RAF) and United States Marines Corps. During the exercises, which began earlier this month, the Marine Corps jets operated as part of the RAF’s carrier air wing (CVW).

“The significance of the United States of America, investing an Air Wing onto another nation’s aircraft carrier is a remarkable achievement,” the First Sea Lord added. “And it speaks to a remarkable relationship in terms of trust and confidence, and the ability to work together.”

The U.S. Marine aviators and support personnel will also be deployed on the aircraft carrier’s maiden deployment next year. As of that exercise the Queen Elizabeth Carrier Strike Group (CSG) will include the U.S. Navy’s Alreigh Burke-class destroyer USS The Sullivans.

The U.S. Navy also announced that the two leaders signed a Statement of Intent for Future Integrated Warfighting that will set a cooperative vision for inter-changeability between the two navies, synchronize pioneering capabilities, strengthen operating concepts, and focus their collective efforts to Deliver Combined Seapower, together.

“We have a long tradition of sailing together from the Atlantic to the Indo-Pacific. No doubt, our storied past has strengthened our friendship today, and will do so far into the future,” said Gilday. “After months of hard work on both sides of the Atlantic, we are pleased to sign this Statement of Intent that will set a cooperative vision for interchangeability. By organizing our cooperation together on Carrier Strike, Underwater Superiority, Navy-Marine integration as well as future warfighting efforts like unmanned and AI, we will remain on the leading edge of Great Power Competition.”

“In an increasingly contested world, alliances and partnerships such as that between the UK and the U.S. are vital,” said Radakin. “We have already proven how closely we can work together, from developing our carrier strike capability to jointly demonstrating freedom of navigation around the world. Now, as we move towards every greater interchangeability, I am excited by the opportunities to strengthen and deepen our partnership today and in the years to come.”

During a panel at Atlantic Future Forum, the First Sea Lord and Assistant Secretary of the U.S. Navy James “Hondo” Geurts also announced that the tech bridge would be used to share ideas, and not just from government to government. It would also include industry and academia, as well as everyday citizens in the two countries.

This bridge would also very much be “two-way” in nature, with the First Sea Lord explaining programs undertaken by the UK that would be shared with the United States. This included efforts to develop an extra-large underwater drone, as well as another program used to control the drones and allow autonomous vehicles to communicate with one another. The First Sea Lord described the technology as “a fundamental of effective warfighting.”

The idea of shared information has also been promoted back in Washington, with Defense Secretary Mark Esper announcing that the Pentagon is launching new efforts to deepen relationships with allies by sharing, as well as selling more weaponry overseas and by working with allied militaries.

According to Breaking Defense, Esper explained, “Together these efforts will help us build the capacity and capabilities of like-minded nations and foster interoperability with friendly militaries while creating a stronger domestic industrial base that can compete in the global marketplace.”