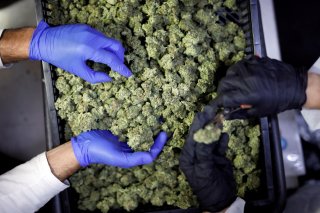 Smoking marijuana has the potential to damage your heart and blood vessels and “trigger” cardiovascular events, according to the American Heart Association’s new scientific statement on cannabis.

The statement, published in the AHA journal Circulation, closely looked at existing research on the connection between cannabis and the heart. They found that marijuana can “interfere with prescribed medications” as well as “trigger cardiovascular conditions or events, such as heart attacks and strokes,” according to clinical pharmacologist Robert Page II, who chaired the medical writing group for the statement.

A recent study cited in the statement claimed that 6% of heart-attack patients under the age of fifty used cannabis. Other research findings showed users in the eighteen to forty-four age range had significantly higher risk of having a stroke compared to nonusers.

Some studies have discovered that within an hour of smoking marijuana, THC, which is responsible for giving the “high,” may induce heart-rhythm abnormalities. THC also appears to stimulate the sympathetic nervous system, largely responsible for the “fight-or-flight” response, resulting in a higher heart rate and blood pressure and greater demand for oxygen.

Although cannabis use might benefit conditions like muscle stiffness associated with multiple sclerosis, the statement said marijuana does not appear to help in the prevention or treatment of cardiovascular diseases.

A few other studies have reported benefits for individuals with age-related diseases, including Parkinson’s and Alzheimer’s, but there’s still a lack of research on the long-term effects of cannabis use among this particular population.

Before starting any regular cannabis use, its potential health risks should first be discussed with a health-care professional, the report said.

“If people choose to use cannabis for its medicinal or recreational effects, the oral and topical forms, for which doses can be measured, may reduce some of the potential harms,” Page said in a statement.

The AHA noted that marijuana’s use has steadily risen over the past decade, especially among people between ages eighteen and twenty-five. Although many states have legalized medical and/or recreational use, cannabis is still illegal at the federal level, which makes it difficult to conduct more in-depth scientific research.

“The public needs fact-based, valid scientific information about cannabis’ effect on the heart and blood vessels. Research funding at federal and state levels must be increased to match the expansion of cannabis use—to clarify the potential therapeutic properties and to help us better understand the cardiovascular and public health implications of frequent cannabis use.”