A New Way to Collect Reparations for Ukraine 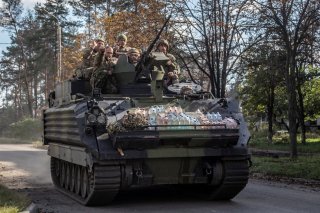 Russia’s war against Ukraine reached new and horrific depths this week after it launched missile and drone attacks on civilian and commercial buildings in Kyiv, Dnipro, and cities across the country. It seems that Russia is shifting from a conflict largely fought on the battlefield to a new war using tactics such as “terror bombing.” If Russian military analysts are to be believed, this will lead to a new style of fighting characterized by “total war” with an economic dimension. In other words, this is punishment for Ukraine’s recent battlefield successes.

The questions this new spate of attacks raises are profound. How can Ukraine be compensated for what Russian bombs and missiles have done to its major cities and economy? How can Ukrainian society be rebuilt and where will the funds come from? These are questions that international policymakers have considered since the beginning of Russia’s invasion.

During a time of globally high inflation, rising national debts, and tighter budgets, funding the reconstruction of Ukraine is likely to be unpopular and politically unpalatable in many countries, even among Ukraine’s most determined allies. Similarly, the possibility of seeking reparations from Russia using traditional models seems remote. Russia retains a seat on the United Nations (UN) Security Council and will veto any attempts by the global community to make it pay for the damage it has caused to Ukraine.

Global leaders and policymakers have sought a solution and in response, the New Lines Institute convened legal and policy scholars to formulate an answer. Our new report, Multilateral Action Model on Reparations, presents a new model for collecting and distributing reparations. It is an effective and ground-breaking system designed to compensate Ukraine for the damage caused by Russia’s invasion.

In thirteen legal conclusions, the report spells out an international legal process to identify, collect, and distribute sanctioned Russian money for the benefit of Ukraine. Our legal analysis envisages the creation of a new fund and compensation commission modeled on that of the United Nations Compensation Commission (UNCC) created to compensate Kuwait in the face of Iraq’s invasion in 1990 but adapted to the new realities of Russia’s aggression. A new reparations deal could be established by international agreement between willing parties.

There are precedents for this model. After World War II, multiple countries took action to define and collect a pool of assets of the defeated Nazi state. The agreement permitted the seizure of German assets in those countries which had signed the treaty and provided for negotiations with those that did not. This allowed for joint efforts to locate and seize Nazi assets internationally for reparations payments.

The democratic world has immense financial muscle and legal power. An agreement of this kind would hardly be beyond countries that have already done so much to sanction Russia and help Ukraine. Signatories of this agreement would commit to seizing Russian assets within their jurisdiction, in accordance with their national and constitutional requirements, and then place them into a fund for subsequent distribution by the new compensation commission.

Many allies of Ukraine have already sanctioned, frozen, and seized billions of dollars in Russian state assets. These assets, which are already sitting idle under the control of foreign governments, can be put to use rebuilding and compensating Ukraine for Russian aggression. It will also be essential in paying for the cost of assisting the people of Ukraine in recovering their mental health and social stability, both of which have been adversely affected by the war. Ukrainians and the Ukrainian state could petition a commission for reconstruction and reparation funds. Once evidence of necessity was produced, the commission could draw on funds gathered by these methods and disburse the money.

There is a lot of Russian capital, including the assets of the central bank and Russian oligarchs, that can be distributed but other sources for reparations are also available. One option compatible with the UNCC precedent would be to place a charge on Russian oil and gas revenues which would be paid into the Ukrainian fund.

Another source of capital that can be seized is the broad range of Russian assets held in the West. Under Vladimir Putin, Russia has developed into a “criminal gang state” where the courtiers and leading supporters of the Kremlin have been permitted to plunder the country. Our report assesses that after twenty years of plundering by Russian oligarchs, there could be in the “low trillions” of dollars worth of Russian assets in the West.

Similarly, a state as corrupt as Russia’s under twenty years of Vladimir Putin’s rule presents other opportunities to provide reparations to Ukraine. Much of this is common knowledge and the subject of extensive reporting. The late Karen Dawisha noted in her book Putin’s Kleptocracy that every year, hundreds of billions of dollars are paid to affiliates of the Kremlin in bribery money alone. A creative treaty regime could render those assets available for seizure and use in the fund.

The authors intend this model to assist Ukraine as it rebuilds a shattered country, economy, and society in response to Russian aggression. Future conflicts will resemble Russia’s war in Ukraine more than they resemble World War II or Saddam Hussein’s invasion of Kuwait. International law and governance will have to adapt to prevent states that launch aggressive wars from escaping punishment and the duty to compensate the victims. We believe the New Lines model can be a tool to help keep future peace as well as aid in Ukraine’s reconstruction.