Can Ukraine Win Its War With Russia? 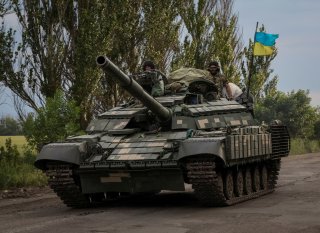 It is difficult to keep up with the speed of Ukraine’s advance in the Kharkiv oblast. We must be careful when hearing of improbable advances but even the things that can be confirmed visually are stunning. Like the defeat of the Russians in the Kyiv oblast earlier in the war, this is an event for the ages—an episode in military history which will be remembered and studied for generations.

As Ukrainian forces retake in days what it took them months to cede, one thing is clear: Ukraine can win. Ukraine is winning and it must be allowed to continue winning.

Much of the media released by Ukrainian forces is poetic. Some soldiers drive down sparse country roads, cheered on by the people they have liberated. Others pull down Russian propaganda posters to reveal the words of Taras Shevchenko, a Ukrainian poet whom the Russians had covered up. Translated into English, Shevchenko’s words swell: “God helps you in your fight! For fame and freedom march with you, and right is on your side!”

Perhaps most moving of all was a video of Ukrainian soldiers clustered in a forest glade before their offensive advance singing the national anthem.

But the successes of the Ukrainian offensive from Kharkiv are not poetic; they are practical. The Kharkiv offensive proves removes any doubt that Ukraine can win. Ukraine can push Russian forces out of the areas they have occupied since February 24 and its soldiers will be warmly greeted by those who have lived under occupation for six months.

And this also proves that the West knows what Ukraine needs and can provide the tools it requires to finish the job.

It took the American high mobility artillery rocket system (HIMARS) to destroy Russian ammunition depots and decrease the effectiveness of Russian shellfire. It took American, British, French, and German howitzers to fire back against entrenched Russian artillery batteries. Anti-tank weaponry provided by a dozen countries neutralized Russian armor. Tanks given by and shipped through Poland have also provided some of the impetus for Ukraine’s advance.

More of this equipment and weapons are needed. What has been given is good enough for the advances in Kharkiv but holding back now cannot be justified. Feeding Ukraine a slow diet of new military aid is prolonging the war by delaying a Ukrainian victory.

The West must understand that hesitating now—even to turn off the taps in fear of Russian overreaction—will condemn Ukrainians still living under occupation to months of summary executions, rape, and the threat of deportation to concentration camps. And it will make Europe’s cold winter harder to bear.

Russia’s defeat is also causing changes within its own politics. Igor Girkin, an intelligence officer who led the annexation of Crimea and organized separatist forces in the Donbass in 2014, has forecast defeat for Russian forces. Client leaders like Chechen president Ramzan Kadyrov also appear to be facing reality.

This is not exclusively good news. If there is a successor to Vladimir Putin, it will likely have to come about through a palace coup. There is a good chance that whoever holds power next will be another ex-KGB man, an army general responsible for thousands of civilian deaths, or a creature of the Putin regime.

But while the possibility of intrigue floats overhead, this is not the time to waver. Rather than being strong, Putin is weak. His policy of unchecked expansion can now be decisively defeated for years to come, if not a generation.

It is incumbent upon the West to help Ukraine achieve such a victory, both for Kyiv and all of Europe. This can only happen if Western democracies understand that the war has reached a crucial point.

Most analysts were forecasting a protracted struggle through the winter followed by significant moves in spring 2023. Some were so bold as to say that Ukrainian forces might try to make enough of an advance before the campaign season ended to justify continued Western military support.

No one predicted a Russian rout and collapse. But now there is an opportunity to send the invaders running, diminish the danger to Ukraine and Europe, and ensure that Russia’s imperial delusions are rendered absurd and impractical through a military defeat.

If this is possible, the worst fears of a Europe condemned to perpetual warfare can be avoided. We must thank the Ukrainians for that prospect and do so by providing them with the tools they need to finish the job.