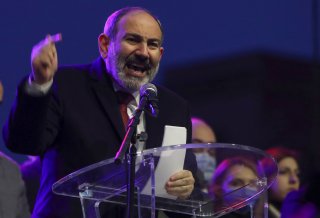 Armenia is teetering on the brink of government collapse following waves of violent mass protests, and it all started with a dispute over a Russian missile system.

During an interview with a local news outlet in late February, Armenia’s Prime Minister Nikol Pashinyan was grilled on Armenia’s ill-fated war effort during the Second Nagorno-Karabakh conflict. The interviewer confronted Pashinyan with his predecessor Serzh Sargsyan’s criticism that Armenia’s armed forces failed to effectively make use of their 9K720 Iskander ballistic missile systems. “This innuendo could be addressed to me, but I think the outcast [referring to  Serzh Sargsyan] should know the answers to many questions, instead of asking questions to which there are no answers,” Pashinyan retorted. “And maybe they will answer why the launched Iskander [missiles] did not explode or exploded at a rate of, let’s say, 10 percent,” he added. The incredulous interviewer pushed back on Pashinyan’s statement, but the prime minister remained unfazed: “I don’t know. . . . maybe they were weapons from the eighties,” he said.

Representatives of Russia’s military and a slew of Russian lawmakers have vigorously rebuked Pashinyan’s negative assessment of the Iskander system, with deputy chairman of a State Duma committee on defense and security Viktor Zavarzin going as far as to call it a “complete lie.” Defense Ministry spokesman Igor Konashenkov gave a similar stance: “In all likelihood, Armenian Prime Minister Nikol Pashinyan was misled, as a result of which he used inaccurate information.”

The Kremlin’s swift and strident response to Pashinyan’s comments is hardly surprising; as a leading global arms exporter, Moscow seeks to protect consumer confidence in its military hardware. As a matter of fact, the Iskander system is not “from the eighties”—it entered service in Russia’s armed forces in 2006. Armenia became the first foreign customer to import the system’s export version, the Iskander-E, in 2016.

Pashinyan’s comments were unhelpfully ambiguous. Was he suggesting that the system’s ballistic missile warhead somehow malfunctioned by not detonating after making contact with its target, that it was intercepted by Azerbaijani missile defenses, or that it missed its target altogether? The prime minister’s office issued a brief statement earlier this week suggesting that he was “misinformed about the situation,” without issuing any additional clarification as to his original intent.

Further still, Russia’s defense ministry insists that Armenia never fired any Iskander missiles throughout the Nagorno-Karabakh war: "According to objective and reliable data confirmed by the live monitoring and recording system, none of the missile systems of this type was used during the conflict in Nagorno-Karabakh," read a recent Defense Ministry press statement. According to sources cited in unconfirmed reports, Armenia did use its Iskander units in the latter days of the war. Anonymous Armenian military officials have told reporters that an Iskander missile was fired at Azerbaijan’s capital of Baku toward the end of the conflict and that it was intercepted by the Indo-Israeli Barak-8 air defense system.

Armenian opposition parties have pounced on Pashinyan’s Iskander snafu, accusing the prime minister of deflecting blame for Armenia’s poor military performance while needlessly harming relations with Russia. Pashinyan tried to quell the scandal by firing the deputy chief of the military's general staff, who publicly disputed the prime minister’s Iskander remarks. He then dismissed general staff chief, Col. Gen. Onik Gasparyan, after he condemned the firing as illegitimate. The ensuing outrage over Pashinyan’s comments has ballooned into an ongoing wave of popular mass protests that are threatening to topple his government.