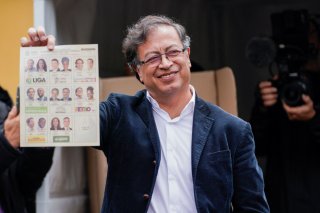 However, Petro will not have a majority in Colombia’s congress, as his leftist coalition, the Historic Pact, has only 15 percent of the seats in both houses. This will certainly complicate his ability to pursue a more radical agenda.

On his third attempt at the presidency, Petro won with 50.48 percent of the vote. Out of thirty-nine million Colombians eligible to vote, roughly 21.6 million voted, which put voter turnout at 58.1 percent. Although this marks the highest participation in over twenty years, voter abstention in presidential elections has been consistently above 40 percent since 1990. The bottom line is that nearly two-thirds of all eligible Colombian voters did not vote for Petro. In essence, Petro’s victory numerically does not amount to a popular mandate.

This underscores the need for Petro to avoid overreach as president by moderating his policies, shifting to the center, and forgoing his more radical proposals. By reaching out to his opposition substantively—in action, and not just words—Petro’s presidency could defy the expectations of his most vocal critics, which would ultimately benefit Colombia and set an example for the broader region. If Petro decides to pursue his more radical policy proposals and alienate his opponents, including large swathes of Colombian society, his presidency will prove polarizing and potentially disastrous for Colombia, and beyond. It would result in political and economic gridlock and possibly threaten Petro’s ability to complete a full presidential term.

In public office, Petro developed a reputation for hubris and contemptuousness. This obviously does not bode well for effective outreach to political opponents in Colombia’s legislature. Furthermore, Petro’s agenda could encounter additional challenges by Colombia’s traditionally independent judiciary.

Petro clearly originates from the far Left of the political spectrum. His supporters regard him as a progressive and highlight his democratic credentials and service as an elected senator and mayor of Colombia’s capital city, Bogotá.

However, Petro’s critics point out his past as an urban guerrilla committed to the violent overthrow of democratically elected governments. They emphasize that his political populism fundamentally presents a direct threat to Colombia’s institutions and democratic system. There is deep concern that Petro will take Colombia down the same disastrous path of Chavismo in neighboring Venezuela.

In order to ensure a productive four-year, one-term presidency, as enshrined by Colombian law, Petro must rise to the occasion and elevate himself above the political fray—not by choice but by necessity.

The realities of executive power must provide Petro with a sobering impact. He must avoid a hubristic approach to national leadership. It is crucial that Petro not underestimate the magnitude of the tasks at hand and the responsibilities of governing a highly diverse nation of fifty million people.

As Latin America’s third most populous nation, Colombia is also the region’s fastest growing and fourth largest economy. But foreign investors remain deeply concerned about Petro’s radical agenda. Despite officially congratulating Petro, the United States has been fearing his victory and the implications for Colombia, America’s most important ally in Latin America, for decades.

Publicly, Petro has promised to institute changes to U.S.-Colombian relations, including a renegotiation of a free trade agreement and new policies to fight drug trafficking. Furthermore, Petro’s willingness to resume diplomatic relations with Venezuela has set off alarm bells, particularly as many violent armed attacks and other forms of instability have been emanating from Venezuelan soil.

All parties concerned about Colombia’s future, both at home and abroad, are cautiously waiting for what unfolds before, during, and after Petro’s inauguration on August 7. Whatever happens in Colombia will inevitably impact the future course of the broader region, and beyond.

Petro must decide whether he will pursue the path of responsible government within the confines of the nation’s institutions of power or take a more populist course. That is, operating on the periphery of constitutional limits, or potentially beyond, which seriously risks a reaction. Colombia’s legislature and judiciary will be vigilantly monitoring the situation throughout, as will the nation’s military and security establishment.

As for Latin America, Petro’s victory in Colombia has accelerated the region’s broader shift leftward, particularly after leftist victories in Peru, Chile, and Honduras in 2021. The general exception was Ecuador, although the future of its center-right President Guillermo Lasso is threatened by mass public protests.

This leftward regional shift would be consolidated if former President Luiz Inacio Lula da Silva returns to power in Brazil’s national election in October 2022. According to current polls, he is on his way. However, between now and then, anything remains possible within the context of extreme volatility dominating politics globally.

Marco Vicenzino is a global strategy advisor to decisionmakers operating internationally in both private and public sectors. He focuses on geopolitical forecasting and analysis and international business development.