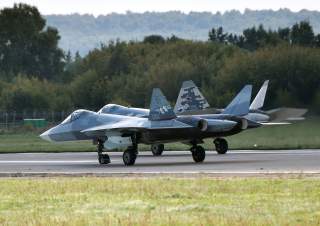 Key point: Ankara needs stealth but may lose its F-35 deal. It could turn to Moscow, but the Su-57 doesn't fit its needs.

Russia’s Su-57 and Su-35S have touched down in Turkey for the upcoming Technofest 2019 festival, the latest in the Kremlin’s determined effort to sell Ankara its flagship fighter technology on the heels of the latter’s ejection from the F-35 program.

The Su-57 and Su-35S have emerged over the past several months as the clear frontrunners in Russia’s export pitch, but what do they have to offer the Turkish air force? There are several factors at play.

The Sukhoi Su-57 is Russia’s flagship fifth-generation stealth fighter. Emerging out of a tortured research and development process stemming back to the early 2000’s, the Su-57 has defied repeated proclamations of its demise--the first serial unit will be delivered by the end of this year, while 75 more are scheduled to be shipped over the coming decade. These are still relatively modest numbers, and intentionally so. Russia seeks to establish the Su-57 as a financially solvent platform through early, high-profile export contracts, proceeds from which will then be reinvested into a more cost-effective Su-57 production process. Russia’s defense industry has aggressively targeted Turkey as a ripe candidate for the Su-57, with Russian President Vladimir Putin even personally pitching the export version of the fighter-- the “Su-57E”-- to Turkish leader Recep Tayyip Erdoğan at the MAKS 2019 Airshow.

Nonetheless, there are two clear import concerns from the Turkish vantage point. First, the Su-57 could never meaningfully replace Turkey’s lost F-35 because the two fighters are designed for fundamentally different purposes: the Su-57 is meant to be a best-in-class air superiority fighter, while the F-35 excels in a deep-penetration, ground-attack role. Secondly, it remains unclear if the Su-57E can be produced in large enough quantities to satisfy Turkey’s early 2020’s procurement timeframe; even if Russias is willing to manufacture  Finally, there are the usual early adopter’s risks of being the first to purchase a fighter with no performance record.

The Su-35S, meanwhile, is also an air superiority fighter that happens to share much of the Su-57's DNA. Frequently referred to as a”4++” generation fighter, the Su-35 boasts the aging, but still capable Al-41F1S engine that was also used in the first Su-57 prototypes. The Su-57 sports a stealthier frame and slightly more sophisticated avionics system, but what the Su-35 lacks in stealth it arguably makes up for in a more diverse ground attack capability.

The Su-35S possess a number of innate import advantages over the Su-57 that, while inconsequential in isolation, can combine to influence Ankara’s procurement decision. For one, the Su-35 has a proven track record as a successful export product, with 24 Su-35S units purchased by China in 2015 for $2.5 billion and 11 more ordered by Indonesia earlier this summer for $1.4 billion. The Su-35 is also likely cheaper; the Su-57E’s price tag yet to be revealed but is almost certain to be well in excess of the Su-35’s cost of $85million per unit.

Although Ankara continues to play its  procurement cards close to its vest, the Turkish defense industry has at least expressed preliminary interest in the Su-35 as an interim solution until it's own, fifth-generation "TF-X" fighter enters serial production: "We are in the early stages of our talks with Russia [on fighter purchase]. Su-35s can become an interim decision for us. We need to hold extensive talks on various topics," Turkish Undersecretary of Defense Ismail Demir said on a Turkish news outlet earlier this month.

Mark Episkopos is a frequent contributor to The National Interest and serves as research assistant at the Center for the National Interest. Mark is also a PhD student in History at American University. This first appeared in September 2019.