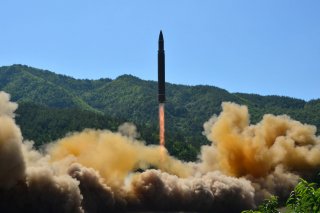 In addition to short- and medium-range missiles that threaten the southern half of the Korean peninsula, North Korea relies on long-range intercontinental ballistic missiles to threaten American allies like Japan, and American assets in the Pacific region—and possibly the continental United States.

The most recent addition to North Korea’s arsenal is the Hwasong-14, which was conspicuously tested on July 4, 2017. The Hwasong-14 is transporter launched and, if North Korean statements are true, could be armed with a nuclear warhead—though some factors would be difficult to overcome, like reentry into earth’s atmosphere and terminal trajectory.

According to CSIS, a leading think tank, the Hwasong-14 “debate continues over the Hwasong-14’s reentry vehicle and whether it is capable of surviving the stresses associated with ICBM distance.”

“Based on its July 28 performance, the Hwasong-14 could have a range of over 10,000 km if flown on a range-maximizing ballistic trajectory. This is far enough to reach the majority of the continental United States,” said a recent CSIS report. “If factoring in the rotation of the Earth, which provides a range boost when traveling eastward, the Hwasong-14’s coverage area would include the West Coast, Chicago, and possibly even New York.” Quite a scary prospect.

In 2019, North Korea tested the Pukguksong-3, which is intended to be a submarine-launched. The missile was not launched from a submarine however, but from an underwater platform. Using cold-launch techniques, North Korea was able to eject the missile from a watertight container under the ocean using pressurized gas and into the air—not necessarily an easy feat.

Though an impressive technological feat for the Hermit Kingdom, the launch should be taken with a grain of salt. North Korea only has “one known experimental submarine capable of carrying a ballistic missile.” Still, North Korea is attempting to build a submarine fleet capable of launching the Pukguksong-3.

Given the newness of the Pukguksong-3, little information is readily and publicly available about it’s range or payload, though North Korea would presumably arm it with a nuclear warhead if possible.

North Korea’s very existence depends on maintaining a functioning, credible military deterrent. Missiles are the answer for the Hermit Kingdom, as North Korea’s conventional military capabilities are in some cases remarkably outdated and obsolete. Will North Korea ever give up their nuclear stockpile? Highly unlikely.