North Korea Could Have 100 Nuclear Warheads by 2020: Analyst 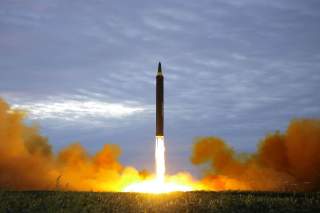 Decked out in a dark suit, surrounded by leather-bound books and sitting comfortably on a plush sofa, North Korean leader Kim Jong-un delivered an olive branch of sorts to the United States during his annual New Years Day speech. His meeting with U.S. president Donald Trump last June in Singapore was a helpful and productive exchange of ideas, Kim told his countrymen—one he would like to continue in 2019. But, Kim continued, if Washington continues to push for one-sided demands or pressure it into unilateral nuclear disarmament, “we [the North] may be compelled to find a new way for defending the sovereignty of the country and the supreme interests of the state and for achieving peace and stability of the Korean peninsula.”

Kim Jong-un’s rejoinder should be taken seriously. The North Koreans have options, and their Plan B in the event of a full-blown collapse of nuclear talks with the United States will likely be adding onto their small nuclear weapons stockpile. Pyongyang certainly has the capability to ramp things up the moment it chooses; according to Robert Litwak, a vice president at the Woodrow Wilson International Center for Scholars, the North Koreans could theoretically possess 100 nuclear warheads by 2020. Needless to say, this is not what President Donald Trump would like in a presidential election year, particularly when the skeptics and cynics camped out in every corner of Washington are already highly unimpressed with the notion that his dalliances with the North Korean dictator will go anywhere. Depending on the actual size of Pyongyang's current nuclear arsenal—U.S. intelligence estimates range from as low as twenty to as high as sixty—it is certainly possible Kim could bring his stockpile into the triple-digits by the time Trump is deep into his re-election campaign.

It doesn’t take a Ph.D. in international relations or thirty years of experience in the bowels of the State Department to recognize that Kim Jong-un’s most prized possession is his collection of nuclear warheads—a strategic asset that provides his regime with the ability to deter countries infinitely more powerful than his own. The larger the arsenal is, the more credible the deterrent becomes.

Therein lies the rub for President Trump. He likely sees his pen-pal friendship with Kim Jong-un as a historic opportunity in the annals of diplomatic history. Trump views every personal letter written and sent by Kim as an affirmation that his brand of personal diplomacy is working. Just this week, Trump held up papers during a televised cabinet meeting—presumably of Kim’s latest letter to the White House—as proof that contacts between Washington and Pyongyang are not in the doldrums as most in the "fake news” media assume. “We’ve really established a very good relationship,” Trump insisted. In Trump’s mind, that relationship will help consummate an agreement that solves the North Korean problem once and for all and lands him the world’s most coveted peace prize.

Up to the present time, there isn't much evidence lending credence to Trump’s hypothesis. The North Koreans and Americans may be talking, exchanging letters and sending each other communications through diplomatic channels, but the process seems gummed up. Since Singapore, we have been operating in a catch-22 situation, with neither side moving from their original demands and waiting for the other to make the first move. The fact the diplomatic process remains alive and the Trump and Kim are still talking, however, is nothing to sneeze at and is surely better than the alternative: no dialogue at all, more missile and nuclear tests, more U.S. bomber flights over the Korean Peninsula, and a return to “fire and fury.”

Last May, Jeffrey Lewis of the Middlebury Institute predicted that the United States will eventually come around to de-facto recognizing North Korea as a nuclear weapons state along the same lines of Israel, Pakistan and India. As long as Kim doesn’t openly test his weapons or openly talk about sending warheads to Guam or the continental United States, Washington would pretend the nuke issue is solved and everyone will go on their merry way. As long as President Trump can market it as a win, he may be sympathetic to the arrangement.