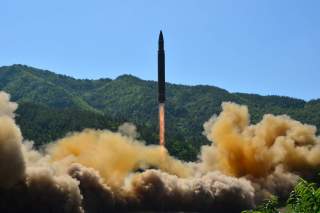 There are small gaps in the radar coverage that allows the U.S. military to detect and attempt to shoot down incoming North Korean and Iranian ballistic missiles.

The Pentagon has ways of plugging the gaps, but they're less than perfect.

Mainland America's last-ditch defense against a small-scale ballistic-missile attack by Iran or North Korea is the 44 rockets of the Ground-based Midcourse Defense system, or GMD, that the U.S. Army operates in Alaska and California.

Hawaii and some U.S. territories are outside the sensors' overlapping coverage and as a result are more vulnerable to attack.

The GMD rockets in Alaska and California require powerful radars to detect and track targets and confirm interceptions. In 2018 the Pentagon possessed two permanent or semi-permanent radar installations for ballistic-missile-defense -- the huge, fixed Cobra Dane radar in Alaska and a pair of smaller, moveable AN/TPY-2 radars in Japan.

The 95-feet-diameter, west-facing Cobra Dane switched on for the first time in 1977 at Eareckson Air Station on the island of Shemya, part of Alaska's Aleutian Islands chain. The U.S. Defense Department built the radar in order to monitor Soviet missile tests.

A generation later in 2004, the U.S. Missile Defense Agency modified Cobra Dane to support the missile-defense mission. U.S. Air Force Space Command also uses the radar to monitor satellites on low Earth orbits. The military plans to spend $280 million upgrading and maintaining the aged sensor through 2023. The work sometimes requires operators to switch it off, according to the Government Accountability Office.

"Information that we reviewed from a more recent two-year period (August 2016 through July 2018) showed that Cobra Dane’s two-year average for operational availability had declined to approximately 88 percent—below the 90-percent requirement," the GAO reported in December 2018.

"Air Force officials stated that the decline in the operational availability over the more recent two-year period was due to a few instances where they needed to take Cobra Dane off-line for extended periods of scheduled downtime (e.g., regular operations and maintenance, calibration of instruments). Further, they noted that when Cobra Dane is not operationally available, the reason is usually due to scheduled downtime.

The Missile Defense Agency told the GAO it could "mitigate" coverage gaps resulting from Cobra Dane maintenance. "Officials stated that they do this by moving a transportable radar, known as the Sea-Based X-band radar, to specific locations in the Pacific Ocean to provide additional tracking coverage of missile threats," GAO explained.

But the $2.2-billion Sea-Based X-Band radar, or SBX, is an unreliable "flop," according to a 2015 Los Angeles Times investigation. "Although it can powerfully magnify distant objects, its field of vision is so narrow that it would be of little use against what experts consider the likeliest attack: a stream of missiles interspersed with decoys."

"SBX was supposed to be operational by 2005," the newspaper continued. "Instead, it spends most of the year mothballed at Pearl Harbor in Hawaii."

The GAO confirmed that, in theory, SBX can "supplement Cobra Dane." But in practice, "U.S. Northern Command can lose the ability to track some missile threat trajectories if Cobra Dane is not available and the Sea-Based X-band radar is not deployed."

"Air Force officials told us that the additional time to track missile threats allows the warfighter an earlier opportunity to intercept a missile threat and deploy additional interceptors if the first attempt fails. Further, the [Missile Defense Agency] analysis described a tracking gap between the areas covered by LRDR—once it is operational at Clear Air Force Station—and the two sets of AN/TPY-2 radars that are currently located in Japan.

"Without Cobra Dane’s coverage of this gap, the analysis found that the warfighter would have a more limited opportunity to intercept a missile threat from North Korea."

Until late 2020 at the earliest, Cobra Dane's maintenance needs and SBX's unreliability leave a detection gap in America's missile-defenses. After 2020, the Long Range Discrimination Radar mostly, but not completely, fills the gap. When the military finally shutters Cobra Dane -- around 2030 according to current planning -- the gap could grow even bigger.