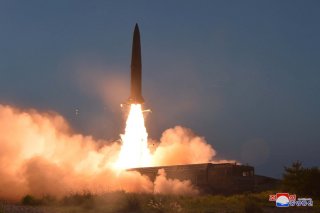 North Korea’s continued development of its ballistic missile capabilities poses a growing risk to the United States and its allies, according to Secretary of Defense Lloyd Austin.

“Pyongyang continues to develop its nuclear and ballistic missile programs, posing an increasing threat to regional allies and partners and with ambitions to be able to strike the U.S. homeland,” said Secretary Austin in written testimony submitted to the Senate Armed Services Committee prior to a hearing on the Department of Defense’s budget request for fiscal year 2022. Austin added that while the United States would prioritize diplomacy as a means of dealing with threats emanating from North Korea, DOD would also continue to focus on maintaining a strong military deterrence in order to support diplomatic efforts.

North Korea has continued to pursue improvements to its nuclear and ballistic missile capabilities despite the presence of pressing domestic challenges including the ongoing coronavirus pandemic. General Mark Milley, chairman of the Joint Chiefs of Staff, remarked in his own testimony that North Korea has shown “no signs of moderation in their focus on military capability at the expense of their most vulnerable citizens and peace on the Korean Peninsula.”

These comments by top U.S. defense officials echo those of other senior military officials, including those of U.S. Army General Paul LaCamera during his testimony as the Biden administration’s nominee to serve as commander of U.S. Forces Korea, who reported that North Korea is unlikely to abandon its strategic weapons or its pursuit of improved capabilities.

More recently, North Korea tested what it described as a new type of tactical guided missile, and which appears to be a new variant of an already very capable short-range ballistic missile (SRBM). That test has led to speculation about possible North Korean development of tactical nuclear weapons, something that North Korean leader Kim Jong Un has said that he intends to do.

With its development of more capable ballistic missile systems, some have pointed to the possibility that North Korea is actively working to develop the ability to defeat U.S. ballistic missile defenses. Recently developed North Korean SRBMs have shown themselves to potentially be capable of evading such systems, while the possible development of a reliable SLBM could allow North Korea to circumvent some defenses. North Korea’s large recently unveiled ICBM, meanwhile, could eventually support multiple re-entry vehicles, which could pose a challenge to U.S. missile defenses.