Not Just China: The U.S. Navy and Marines Are Preparing to Fight in Europe 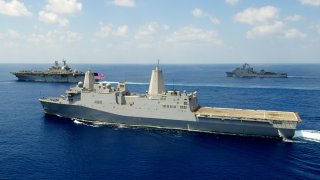 The USS Gunson Hall, a U.S. Navy Whidbey Island-class amphibious dock landing ship, has arrived in Narvik, Norway. According to the U.S. Navy statement announcing the ship's arrival, the ship is in Norway to “enhance U.S.-Norway relations and build NATO Alliance cohesion.”

The ship’s presence is a “demonstration of the U.S. Navy’s continued commitment to the collective defense of the European region and reinforces the strong bond between the United States and Norway,” the Navy’s statement explained.

But, the exercises also build “upon other recent engagements between the U.S. [Marine Corps] and Norway, including USS Kearsarge’s recent port visit to Tromsø, Norway, as well as training opportunities between the two nations during exercises Cold Response 22 and Northern Viking 22.”

While the USS Gunston Hall is in Norway, it will off-load U.S. Marine Corps equipment that the Corps needs for a bilateral training exercise aimed at strengthening American and Norwegian ties.

In light of Russia’s invasion of Ukraine, interoperability with allies in Europe is increasingly important for European and American security.

Despite the Pivot, Europe Remains Relevant

The Marine Corps is in the middle of what is perhaps the most significant retooling and refitting it has experienced in at least a generation. The impetus for the Corps’ sea change is China.

Not only is the People’s Liberation Army Navy the largest in the world, but Beijing has also intensified its rhetoric surrounding the Taiwan issue in recent months.

Despite the obvious threat posed by China, the recent conflict in Russia has proven beyond a shadow of a doubt that Russia remains a force to be reckoned with. Although Russia has sustained incredible troop and equipment losses, Moscow retains a potent nuclear stockpile and significant chemical and biological weapons reserves.

Though the Marine Corps and Navy would like to focus exclusively on the threat posed by a rising China, Russia will pose a serious and credible threat for a long time yet to come.