The U.S. Marine Corps Is Making a Big Change To Take on China (If Needed) 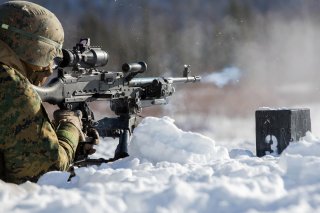 With eyes on the Pacific and a potential near-peer fight with China, the U.S. Marine Corps took a page from their past and reactivated the 1st and 2nd landing support battalions. Though the U.S. Marine Corps is considered the United States’ expeditionary force-in-readiness, these two battalions would represent the tip of the spear in the event of another conflict anywhere west of Hawaii.

In a statement, Lt. Col. Randall L. Nickel, commanding officer of 2nd Landing Support Battalion elaborated on how the U.S. Marine Corps is adapting to better confront challenges not seen for several generations. “The re-establishment of 2nd Landing Support Battalion comes during a time of significant transformation within the U.S. Marine Corps. Small landing support elements will be vitally important to enable throughput and sustainment of distributed forces,” Nickel explained.

“Whether this is accomplished in the littorals via amphibious ships or via aerial delivery, landing support to the Fleet Marine Force is essential to ensure mission accomplishment.”

The U.S. Marine Corps activated the 1st and 2nd Landing Battalions in 1942 and 1941. Both battalions would serve in some of the U.S. Marine Corps most storied battles of World War II, including Okinawa, Guadalcanal, Saipan, Tarawa, and Tinian where they worked to give a semblance of order to otherwise hellish and confused landings.

A turning point for USMC Landing Battalions came during the landings at Guadalcanal, where the fog of battle and heavy casualties caused some landing logistics Marines to become mixed in with Marine infantrymen and head inland rather than support landings at the beach.

In order to remedy this confusion, the uniforms of the Landing Marines were slightly modified to make them visually distinct from Marine infantrymen: a small red patch was sewn onto their pants and utility cover, or hat, to keep them on the beach and prevent them from being called forward. This same red patch is used by today’s landing Marines.

Unlike their World War II forebearers though, this generation of Landing Support Marines have to coordinate landings from ship to shore as well as from the air. Though there are currently landing support Marines, the reactivated support battalions bring various landing elements together and “under one roof.”

Landing Marines will provide “support for II Marine Expeditionary Force and other Marine Air-Ground Task Force operations in order to enable the distribution of equipment, personnel, and supplies by air, ground, and sea.”

The U.S. Marine Corps is in the midst of some radical changes. In recent months the service has moved to deactivate all of its tank battalions, drastically reduced its artillery inventory, and fielded new amphibious vehicles to bring Marines from ship to shore. Despite all the change, one thing is certain: the Marine’s little red patch is back and is here to stay.