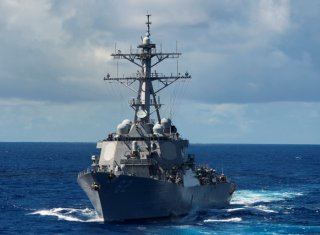 Navy destroyers, amphibious assault ships, and even aircraft carriers are now being engineered with a new generation of longer-range high-fidelity radar technology able to identify threats with great specificity.

The AN/SPY-6 family of radar systems, built by Raytheon, is now being integrated as a series of scaled variants intended to meet the mission needs of specific ship classes. The most sensitive SPY-6 radar, called the SPY-6 V(1), is now being built into the Navy’s emerging DDG 51 Flight III destroyers. The SPY-6 V(1) is said by Navy developers to be thirty-five times more sensitive than the radar system it will replace. Developers say it enables the detection of objects twice as far away and half the size of those existing radars can locate.

Another variant, called the Enterprise Air Surveillance Radar (EASR), is tailored to the mission sets amphibious vehicles and aircraft carriers are tasked with. The EASR system is now being built onto the USS Kennedy, the Navy’s fast-emerging second Ford-class carrier.

Similar to its predecessor, the Agis AN/SPY-1D radar, the SPY-6 radar family includes a phased-array radar. The SPY-6 consists of S-band and X-band radars and a radar suite controller. The S-band radar is engineered for long-range detection, whereas the X-band radar performs the over-the-horizon search capability. Together, the technologies are able to scan, track, and search the horizon and surrounding areas for threats by sending an electromagnetic signal into the atmosphere and analyzing the return signal of what it hits. The information can provide dimensions of missiles or other incoming threats by identifying their size, shape, location, and trajectory.

The versatile SPY-6 V(1) is optimized for anti-air and ballistic missile defense missions but is also capable in the anti-surface and counter-battery arenas.

Much like today’s AN/SPY-1D radar, the SPY-6 V(1) will be able to scan the surface as well, assisting with the fire-control technology needed to identify where an incoming threat can be intercepted.

This breakthrough technology introduces substantial new tactical capabilities, such as a massively expanded time envelope in which ship commanders can identify incoming threats and determine counterattacks. Moreover, when smaller threat objects are identified with greater resolution and at much farther distances, ship defenses can be effectively “cued” to respond from safer stand-off ranges.