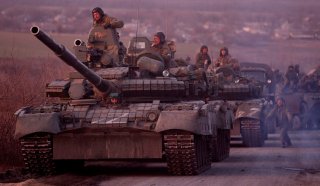 Novaya Gazeta, Russia’s most prominent independent newspaper, announced on Monday that it would suspend publication for the duration of Russia’s “special military operation” in Ukraine after receiving a legal warning from Russia’s “Roskomnadzor” agency, which regulates communications in the country.

The newspaper said the shuttering would be effective “on our website, social media networks, and in print.” Although new articles have not been published since Monday, the paper’s website with old articles is still accessible.

While other independent news outlets, including the “Rain TV” television channel and the “Ekho Moskvy” radio station, shut down altogether in the opening days of the invasion, Novaya Gazeta initially attempted to continue its reporting in accordance with Russian law. Prior to its shuttering, the newspaper repeatedly removed content from its website that the Russian government claimed constituted violations of a new law prohibiting criticism of the country’s armed forces. In practice, that law has been widely applied as a ban on criticizing any aspect of the war, including its description as a “war” or “invasion,” according to Western observers.

Novaya Gazeta editor Dmitry Muratov, who received the Nobel Peace Prize in 2021 for his investigative reporting, insisted to the paper’s readers that the decision to suspend operations had been “awful and difficult,” but the shutdown was necessary in order to preserve the newspaper after the war.

“There is no other choice,” Muratov wrote.

On Monday, Roskomnadzor issued its second warning against Novaya Gazeta for quoting an organization without identifying it as a “foreign agent,” a requirement under Russian law. The bureau did not specify which article had broken the law or which foreign agent had not been identified. The second warning clears the path for the Russian government to revoke Novaya Gazeta’s publishing license. Novaya Gazeta’s editors said they shut down the newspaper to save the publishing license.

Although it has largely steered clear of direct criticism of the war, the newspaper had reported on the negative impact of the conflict and its accompanying sanctions on the Russian economy. The previous day, Muratov had participated with other Russian journalists in a group interview with Ukrainian president Volodymyr Zelensky. Russian authorities banned the interview within minutes, although it is still accessible outside Russia.

Censorship within Russia increased dramatically following the Kremlin’s invasion of Ukraine on February 24. In addition to the Rain TV and Ekho Moskvy closures, the Russian government has banned several foreign Russian-language outlets, including the BBC, Voice of America, and Radio Free Europe / Radio Liberty, from broadcasting in the country.

Russia is consistently ranked as one of the most dangerous countries in the world for journalists. In Muratov’s Nobel Prize acceptance speech, he dedicated the prize to six Novaya Gazeta reporters who had been murdered during investigations for the paper.