Nuclear Nightmare: Are India and Pakistan on the Brink of War? 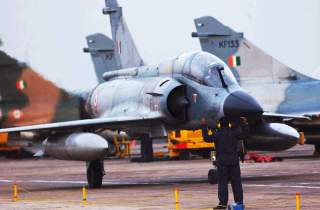 Indian warplanes on Feb. 26, 2019 crossed the line of control at India's border with Pakistan and bombed what New Dehli described as a camp belonging to the terror group Jaish-e-Mohammed.

It was the first Indian air strike on Pakistani territory since 1971. Islamabad threatened to strike back.

"The attack involved an explosive-laden car ramming into two buses of a [police] convoy on a highway near Letpora, 20 kilometers [12 miles] from the capital of Srinagar," Um Roommana reported at The Diplomat.

The rather large convoy of 78 vehicles was travelling from Jammu to Srinagar after incessant snowfall had held up traffic for days. The impact of the explosion was such that it was heard up to 10 kilometers [six miles] away from the blast site. Pictures in the immediate aftermath of the blast showed gory images of dead bodies scattered on the road, with confusion reigning supreme.

As soon as the JeM claimed responsibility, the Indian government lost no time in pinning the blame on Pakistan for nurturing the group. The deadly nature of the attack and the number of casualties sparked anger in India, with many demanding an end to terrorism emanating from Pakistan.

Twelve days later, "villagers near the town of Balakot in northeast Pakistan were shaken out of their sleep by what seemed like an earthquake ... only discovering once dawn broke that there had been an Indian airstrike on their neighborhood," Reuters reported.

The Indian air raid killed "a very large number of JEM terrorists," India’s foreign secretary claimed. The villagers, however, told Reuters only one person was wounded in the attack and no one died.

Now tensions between the nuclear-armed states are at a dangerous high.

"The exact size and scope of the [Balakot] operation remain unclear," Joseph Trevithick explained at The War Zone.

Indian media reports, citing anonymous sources, say that as many as a dozen Mirage 2000s took part in the mission. One of the country's EMB-145 Netra airborne early warning and control aircraft, an Il-78 Midas aerial refueling tanker and at least one Israeli-made Heron drone were also reportedly involved.

The planes would have had to have been close to their targets to have employed this type of precision-guided munition.

"The raid lasted 21 minutes," David Cenciotti reported at The Aviationist. "The Mirage 2000 jets crossed the LoC at low level and around 3:30 A.M. [local time] the targets located near Balakot, Pakistan, were hit by Israeli SPICE 2000 EO/GPS-guided 2000-pound bombs."

With a maximum range of 200 kilometers [124 miles], the SPICE is a pretty interesting [precision-guided munition], to be used to hit sensitive target whose coordinates are very well known ahead of the raid. Moreover, the weather is reported as overcast in the target area, hence the need for a GPS-guided bomb rather than a [laser-guided bomb].

Two days before the Balakot raid, Marshal Mujahid Anwar Khan, the head of the Pakistani air force, said the air arm was ready to "thwart any misadventure by the enemy."

The Indians succeeded in their apparent next attempt to bomb Balakot. Pakistan vowed to retaliate. "We will respond and we will surprise you," a Pakistani military spokesperson said at a press conference. The "response will come at a point and time of our choosing."

The same day as the Balakot attack, Indian army troops reportedly used a Spyder missile to shoot down a Pakistani drone on a reconnaissance mission near the border.