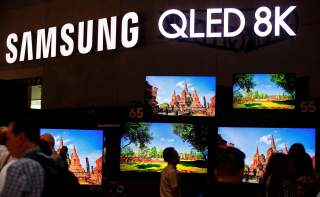 As someone who is lucky to own an LG 55 inch OLED TV and two different models of Samsung QLED TVs (a Q60 and a Q7F) I get asked a lot what TV I like better. The answer I always give is a simple one: It depends on what your preference is.

For me, I like QLED better. Now, look, I don’t have access to the CNET labs to run high-end tests, access to the best and most sophisticated equipment to test color saturation, brightness levels, possible burn issues and so on. My test is a really simple one: what I feel is the better picture and value, along with what is best for my wife when you factor in our own viewing habits.

That means QLED. As someone who watches a lot of cable TV news—I work for a think tank so what happens in the world matters, and sometimes I am lucky enough to be called to be a guest—I worry about burn-in. If I watch a lot of Fox News or CNN, I don’t want to be left with the Fox logo on my screen for years to come if I don’t change the channel for long stretches of time.

That is the simplest explanation, but there is much more. For me, I find the QLED picture on both of my Samsung’s to have a brighter screen. That matters to me for some reason, maybe more than the overall picture quality that the OLED delivers.

Then there is the OLED’s LG based OS—which is horrible. I can’t tell you how many times my wife has called me begging me to help her turn on Netflix, standard cable TV or just an over-the-air broadcast. It does not sync up well with any soundbar we have tried and does not connect to our Wi-Fi connection very well—and I have tried different routers and ranges from the TV as well.

I have a feeling there will be more QLED converts in the months to come. With TCL now embracing the technology at very cheap price points, it is hard to resist their top-tier 8 series TV. In fact, that 8 series offers Roku, and some claim that picture quality is comparable to OLED. Just make sure you know who made that TV, or why the TCL price beats everyone else—some may take issue.