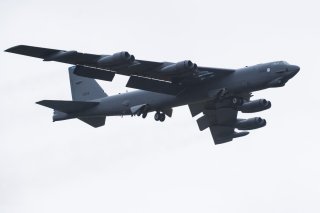 The United States and NATO are stepping up Bomber Task Force missions throughout Europe to train and promote allied interoperability given Russia’s invasion of Ukraine.

American B-52 bombers from Minot Air Force Base, North Dakota arrived in the United Kingdom last month for Bomber Task Force operations with numerous NATO allies, according to a U.S. Air Force statement.

A bomber presence is especially important for the U.S. and NATO deterrent posture in the European theater. The Russian military relies heavily on mechanized elements supported by long-range fires, though many of Russia’s best tanks have been destroyed or damaged in Ukraine. Thus, NATO seems well positioned to prevail in a major land war with Russia.

But achieving air supremacy is also a critical component of NATO defense planning. The real margin of difference between NATO and Russia is perhaps most visible in the realm of air power. The number of U.S. and allied fifth-generation aircraft, such as the F-35 stealth fighter, will make it difficult for Russia to compete for air supremacy since it only operates a small batch of Su-57 fifth-generation aircraft.

What this means is that NATO would be more likely to achieve air superiority in a conflict with Russia. If stealth fifth-generation aircraft neutralize Russian air defenses, B-52, B1-B, and other European bombers could launch a devastating second wave of attack against Russian ground forces. This is likely the thinking behind U.S. and NATO efforts to step up and increase Bomber Task Force patrols throughout Eastern Europe.

There is also a very significant stealth bomber component in European Bomber Task Force patrols. Russian media often states that the country’s advanced air defenses would be able to track and destroy stealth platforms such as the B-2, but this capability has not been demonstrated yet. Even if next-generation radar systems are better networked, enabled by high-speed digital processors, and able to identify stealth aircraft across a wider range of frequencies, that does not mean the system could maintain a narrow target track. Lower frequency Russian surveillance radar could detect incoming stealth aircraft but that is quite different from engaging it with anti-air systems from the ground.