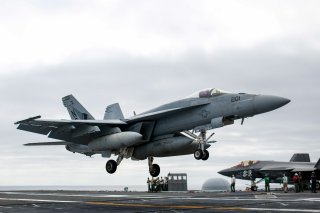 On July 8, a U.S. Navy F/A-18 Super Hornet aboard the USS Harry S. Truman fell off the carrier’s flattop and into the ocean. Higher than expected winds caused the overboard incident. The fighter jet was empty when it plunged into the Mediterranean Sea.

The official U.S. Navy statement on the incident said that “an F/A-18 Super Hornet assigned to Carrier Air Wing (CVW) 1, embarked aboard USS Harry S. Truman (CVN 75), blew overboard due to unexpected heavy weather in the Mediterranean Sea. The carrier was conducting a replenishment-at-sea, which was safely terminated through established procedures.”

The statement continued: “All personnel aboard the ship are accounted for. One Sailor received minor injuries while conducting operations during the unexpected heavy weather. The Sailor is in stable condition and expected to make a full recovery. USS Harry S. Truman and embarked aircraft remain full mission capable. Details and the cause of the incident are under investigation.”

The USS Harry S. Truman has been stationed in Europe since December, a consequence of the ongoing Russian invasion of Ukraine and heightened tensions on the continent. Back in March, U.S. Navy officials explained that Air Carrier Wing 1, embarked aboard the USS Harry S. Truman, had been flying up to ninety flight sorties per day.

The Navy has apparently not yet decided if it will try to recover the aircraft or simply leave it resting on the bottom of the Mediterranean. However, the Navy already recovered other aircraft from the depths of the ocean earlier this year.

An F-35C Lighting II Joint Strike Fighter hit the USS Carl Vinson’s ramp during a low landing attempt in March. The underside of the stealth jet’s fuselage struck the aircraft carrier’s side, slid across the flight deck, and plunged into the Pacific Ocean.

Ultimately, the Navy opted to recover that fighter from 12,400 feet underwater. The aircraft’s recovery was a no-brainer. As the world’s most advanced fifth-generation stealth fighter, keeping the F-35’s technical aspects a secret is of utmost importance for not just the United States but also any allied countries that operate the jet.

The F/A-18 Super Hornet, a fourth-generation fighter, is less likely to draw attention from U.S. adversaries, partly because of its location—in the Mediterranean rather than the Pacific—and also because of its lack of radar-mitigating features.