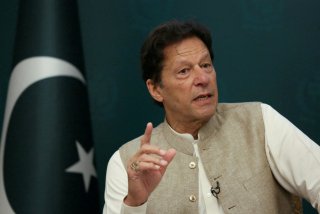 The speaker of Pakistan’s lower house of parliament announced on Sunday that the legislature would consider a no-confidence motion against Pakistani prime minister Imran Khan later in the week—leading to fears that Khan might be ousted, potentially causing a political crisis and further instability in the country.

The odds for Khan’s potential ouster were sharply improved in early March after an alliance of opposition parties officially filed the no-confidence motion, alleging that the cricket star-turned-politician no longer had enough votes in parliament to maintain his position. Khan’s centrist-populist “Pakistan Movement for Justice” (PTI) political party is the largest in parliament, but Khan’s coalition no longer holds a majority following a series of high-profile defections over the past year. The PTI holds 155 seats, while the opposition coalition, led by the Pakistan Muslim League, holds 163 in total. Both numbers are decisively short of 172, the number needed for a majority in Pakistan’s parliament, and a handful of independent lawmakers have not publicly indicated how they will cast their votes in the upcoming contest.

The parties allied against Khan are divided in ideology and background, from the liberal People’s Party to the conservative Muslim League, and it is unclear who they would support to replace Khan if he were successfully voted out. However, because a no-confidence vote is a vote against an incumbent rather than a vote in favor of an alternative, the disparate parties have maintained unity in their opposition to Khan, despite the lack of clear alternatives.

Nearly all opposition lawmakers have accused Khan of mismanaging Pakistan’s economy and provoking tensions with India, Pakistan’s neighbor and longtime adversary. They have also highlighted Khan’s supposedly poor relationship with Pakistan’s powerful military, which has long been a political force in the country and has periodically overthrown the civilian government, most recently in 1999. However, military leaders have denied reports of disagreements with Khan.

Khan and other PTI lawmakers have countered these charges by accusing opposition figures of bribing the defecting members of his party and threatening legal action against parliamentarians found to have opposed him for economic gain. The prime minister has also promised to hold an enormous rally in Islamabad, Pakistan’s capital, in an attempt to display continued support among Pakistanis and warn of potential political consequences for lawmakers who vote against him.