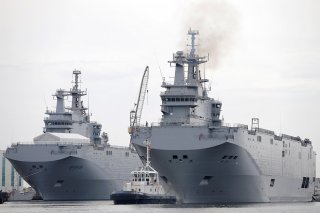 The French navy has mobilized all three of its Mistral-class amphibious assault ships and is deploying them across Europe, Asia and the Americas in response to the coronavirus pandemic.

The mobilization of the assault ships Mistral and Dixmude on March 25, 2020 came just five days after the French fleet sent sister vessel Tonnerre to Corsica to transport coronavirus patients to hospitals in mainland France.

The Mistral surge, part of the French military’s Operation Resilience, represents one of the most concerted efforts by a navy to deploy its bigger vessels for pandemic relief.

French President Emmanuel Macron described Resilience as an “unprecedented military operation dedicated to supporting public services and the French people in the fields of health, logistics and protection.”

Mistral will support the French territory of Reunion in the Indian Ocean. The ship already was in the region for training when the government announced the pandemic-relief operation. Dixmude at the time of the announcement was in the Mediterranean Sea but will sail west to aid France’s Carribean territories.

Tonnerre’s crew reportedly added isolation equipment to some of its facilities in order to protect themselves from infection during their Corsica mission.

Mercy is heading for Los Angeles. Comfort is on the way to New York City. The vessels won’t actually treat coronavirus patients. Rather, they will handle non-virus trauma cases in order to free up beds and personnel in civilian hospitals.

The U.S. Navy’s own 33 amphibious ships, in particular its 10 big-deck Wasp- and America-class vessels, also could perform a pandemic-response role. The 40,000-ton amphibs have even more medical capacity than the Mistrals do. Wasps and Americas can handle as many as 600 patients at a time.

But at present, the American amphibs are making the pandemic worse, not better. The U.S. Navy’s first coronavirus cases were among the crew of USS Boxer, a Wasp-class vessel.

The United Kingdom for its part has decided that it’s more efficient to deploy its military-medical forces on land. Contrary to some media reports, the Royal Navy’s casualty-receiving ship Argus isn’t deploying to London to bolster the city’s hospitals as the coronavirus continues to ravage the United Kingdom.

The U.K. military is focusing on setting up a makeshift hospital at London’s ExCel conference center. The military calls the facility “National Health Service Nightingale.”

David Axe serves as Defense Editor of the National Interest. He is the author of the graphic novels  War Fix, War Is Boring and Machete Squad. This article first appeared last September.