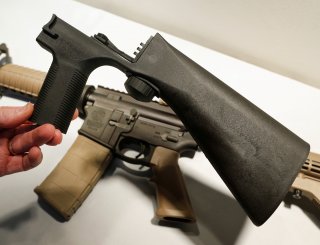 This past June the firearms world lost one of its own when Patriot Ordnance Factory (POF-USA) founder, owner and President Frank DeSomma died from injuries sustained in a traffic accident in the company’s hometown of Phoenix, Arizona. He was a passionate firearms enthusiast, supporter of the Second Amendment and a true patriot who went above and beyond to support military personnel and veterans.

As a firearms manufacturer, DeSomma was also in many ways a twenty-first-century small arms pioneer whose name has earned a place alongside the likes of Samuel Colt, John Browning and John Garand. More importantly during his career DeSomma refined and improved upon the work begun by Eugene Stoner and the AR-15 platform.

The Brooklyn-born engineer didn’t set out to be a gunsmith or even a firearms designer. He had spent twenty-eight years working as an aerospace industry engineer and he took that engineering experience to the world of firearms manufacturing after he moved his family to Arizona. He founded Patriot Ordnance Factory in 2002.

The company grew quickly, and DeSomma had earned more than a dozen firearm-related patents in a career that was tragically cut short.

However, his innovations will leave a lasting impact on automatic-rifle (AR) design.

DeSomma has been noted for solving the two common problems of carbon fouling and short-barreled timing issues with the gas impingement systems found with the popular AR-15 modern sporting rifle platform when it is used in dusty conditions. Rather than the operating gases being injected directly into the upper receiver—which is the core operation of most AR-15s—DeSomma’s design resulted in the piston being pushed via an operating rod, which acts on the bolt carrier, setting extraction and reloading into motion. The action resulted in a near-complete reduction of the carbon fouling while it also solved the timing programs with short gas tubes used in some ARs.

As a result of DeSomma’s innovations, in less than two decades in operation, the POF-USA ARs have rightfully earned a reputation for being among some of the very best on the market. The designs have been widely recognized as well.

POF’s Revolution AR-15, which was designed to push the ballistics closer to the AR-10 and chambered for the .308 Winchester cartridge, won the American Rifleman “Golden Bullseye Award” for 2018.

Last year, the company took home the Rifle of the Year award at the 2019 Firearms Industry Choice Awards for the Revolution DI (Direct Impingement), which shared many of the features, advancements and technology of the prior award-winning Revolution PD (Piston Driven). The DI operation was noted for allowing for a smaller profile handguard, lighter weight and nine positions of adjustment thanks to its Dictator gas block.

That was the third year in a row that a POF-USA rifle won the award.

The Phoenix-based company has continued to release innovative firearms and its offerings include the AR-15 styled Minuteman, which is available in rifle and pistol configurations in 5.56 NATO and .350 Legend calibers; and this year even introduced the .22LR Rebel, which has already earned the reputation for being the “ultimate plinker.”

While the industry mourns the loss of DeSomma, it is clear that he left a legacy of firearms that will keep the POF spirit alive and well for generations to come.