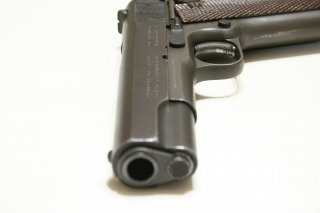 One of the more surprising facts about Samuel Colt that even shooting enthusiasts don't know is that he really didn’t create many of the most iconic firearms to bear his name. While the Colt Single Action Army (SAA) revolver— known as the “Peacemaker”—was a favorite of gunmen on both sides of the law and it went on to earn the distinction of being the “gun that won the West,” Samuel Colt was dead for more than a decade before it was released.

However, it was a testament to the legacy he built as a firearms designer and titan of the firearms industry.

Samuel Colt was one of a special breed; a man who was an inventor, industrialist and most notably a shrewd businessman, but it took a few efforts and even a couple of failures for the iconic gun designer to find his way and develop a product and then convince people they actually “needed” it.

Like other inventors, Colt was a forward thinker who didn’t just create the products but considered how to get people to buy them. Moreover, Samuel Colt didn’t even “invent” the revolver but rather he refined existing designs and then successfully marketed it. His Paterson, which was first introduced in 1836, was really the first “successful” commercial repeating firearm to employ a revolving cylinder that had multiple chambers aligned with a single, stationary barrel—but even then it was far from an instant hit. It was slow to reload and was complicated compared to the single-shot firearms of the era.

The U.S. Army adopted a small number of the Paterson revolvers, but it was found to be too fragile and prone to malfunction. That could have ended Samuel Colt’s latest venture but he continued to promote the weapon’s attributes, and in a twist of fate, Colt found the right customer and the revolver became almost legendary. This happened because Captain Jack Hays armed his company of Texas Rangers with surplus stocks of the revolvers, and the Paterson gave the Rangers the sustained firepower they needed to win the Battle of Bandera Pass against their Comanche adversaries.

It is debatable whether the weapon really made a difference, but Hays and the Rangers praised the Paterson and sales took off. With that success, Colt continued to further refine the revolver.

His iconic designs included the subsequent Colt Walker, which was the first revolver ever purchased by the Army Ordnance Department. That further played a major role in the popularization of the revolver and from that point on there was Colt and then there was everyone else.

Perhaps the most important key to the success of Colt’s Patent Fire-Arms Manufacturing Company, which he founded in 1855, was the use of artist advertisements, celebrity endorsements and corporate gifts to potentially influential buyers. Samuel Colt was as much a pioneer of advertising and product placement as he was a firearms designer. While Christopher Miner Spencer—designer of the Spencer Rifle—may have “pitched” his design directly to President Abraham Lincoln during the American Civil, the fact was that Colt didn't need to so. His use of marketing ensured everyone knew about Colt.

Samuel Colt died at just forty-seven years of age in 1862, yet by the time of his death he had built a company with a solid foundation that has cemented his legacy as one of the greatest gunmakers in history. Colt’s Manufacturing Company continued to revolutionize the use of interchangeable parts and an effective assembly line. It became one of the most dominant players in the American firearms industry from the late nineteenth century until World War I, and to this day the name still evokes quality and craftsmanship like no other.

Colt Manufacturing employed prolific gun designer John Browning to work on the first machine gun adopted by the U.S. military, the Colt Browning M1895, and it was under Browning’s direction that Colt played a key role in military firearm development in the early 20th century. The Browning-designed Colt M1911 pistol was one of the longest-standing military and law enforcement service handguns worldwide—and although it was among Browning’s best accomplishments it is always remembered as a Colt!

During the Cold War, the Colt Manufacturing Company retained its relationship with the U.S. military. Colt didn't develop the AR-15/M-16 but it was responsible for the production, as well as the development of later successful variants including the Colt Commando and M4 Carbine. It can all be traced back to the Colt Paterson and Colt Walker but also Samuel Colt’s ability to use the mass media of the day like no gun designer before.