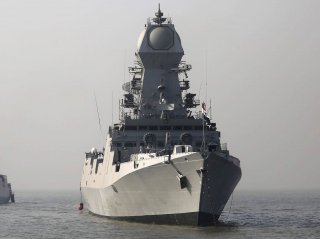 The Indian Navy has reportedly sailed one of its frontline warships to the South China Sea for the first time since the Galwan Valley clash with China in the eastern Ladakh Valley left twenty Indian soldiers dead. The Indian warship, which was not identified directly, maintained continuous contact with U.S. Navy vessels in the region over secure communication systems—and was constantly updated about the status of the movement of military vessels from other countries in the region.

The mission has been described as being carried out in a “hush-hush manner to avoid any public glare.”

“We have deployed a frontline warship in the South China Sea region where the Chinese have been opposing and complaining against the presence of Indian warships,” top government sources told India Today.

The deployment of the Indian Navy warship—despite the claim that it was a hush-hush operation—certainly garnered the attention from Beijing. If the desired intention was to stir up matters with China, the mission was a success already as the presence of an Indian warship in the South China Sea infuriated the Chinese. Beijing has already complained openly about the presence of the warship in the disputed region, which China claims as its own.

This latest salvo in a war of words comes months after the violent border clash on the Line of Actual Control (LAC), the poorly demarcated border between the two nuclear powers. Although standoffs and even fistfights between Chinese and Indian soldiers have been all too common in recent years, until June there were no deaths.

The clash in June led to both sides increasing their respective presence, with China moving in artillery pieces, heavy vehicles and construction materials, while India also deployed aircraft and additional troops to the region.

India has also sought to increase its presence at sea—notably in the Indian Ocean—to counter China’s potential territorial ambitions.

This recent deployment was an interesting move for New Delhi because while India and China have been seen to be fairly evenly matched on land with the nations ranking first and second in terms of the largest armies, China’s efforts to modernize its People’s Liberation Army Navy have been seen to give it an advantage at sea. However, India has some advantages including the fact that if a war were to come it could potentially close the access to the Indian Ocean—and recently may have put such a move to the test.

In addition to sending a frontline warship to the South China Sea last week, the Indian Navy also deployed its frontline vessels along the Malacca Straits near the Andaman and Nicobar Islands, which is a route the Chinese Navy uses to enter the Indian Ocean. It is also a crucial sea trade route for China.

India has recently conducted exercises near Andaman and has deployed its MiG-29K fighters to the islands.

In July, the U.S. Navy’s USS Nimitz Carrier Strike Group (CSG) also took part in cooperative exercises with the Indian Navy in the Indian Ocean, highlighting one of the close partnerships that Washington has while also reaffirming the U.S. Navy’s commitment to support a free and open Indo-Pacific region.