China vs. India: Is a Naval Showdown Brewing in the Indian Ocean? 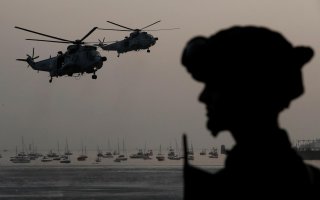 For the past few months, the world has seen the standoff between India and China at the Line of Actual Control (LAC), the poorly demarcated border between the two nuclear power nations. While cooler heads have prevailed and China has moved back in recent weeks in the mountainous region near the Ladakh valley, another showdown could be brewing thousands of miles away in the Indian Ocean.

New Delhi is taking greater notice of Chinese naval activity in the region, which has steadily increased since Chinese submarines visited Sri Lanka in 2014. Task & Purpose/Business Insider reported that Indian officials have made their intentions clear—and could soon move forward with projects to bolster the Indian Navy.

While India and China have been seen to be fairly evenly matched on land with the nations ranking first and second in terms of the largest armies, China's efforts to modernize its People’s Liberation Army Navy have been seen to give it an advantage at sea.

However, China may not have as much of an advantage as some would suggest.

India and China are two of the nine nations that currently operate aircraft carriers—and both nations operate carriers that were modified Soviet-built warships. The PLAN’s first domestically-built carrier, Shandong, entered service in late 2019, but India’s own home-built carrier, INS Vikrant, was launched in 2013 and is expected to enter service in 2021. More importantly, the Indian Navy had previously operated two ex-Royal Navy carriers including the ship to be named INS Vikrant (ex-HMS Hercules), which saw service in the Indo-Pakistani War of 1971.

Robert Farley described India’s carrier plans earlier this year. “Despite considerable economic challenges, India took carrier aviation very seriously in the years after independence,” Farley wrote. “Unlike China (or even the Soviet Union), India focused on carriers instead of submarines. INS Vikrant, a Majestic-class light carrier, served from 1961 until 1997, fighting effectively in the 1971 war. INS Viraat, formerly the Centaur-class carrier HMS Hermes, joined the Indian Navy in 1987 and served until 2016. These carriers gave the Indian Navy long-term experience in carrier ops, as well as a compelling organizational logic for maintaining a carrier capability.”

One topic of serious discussion in how India can address Chinese expansion and aggression involves control of the Malacca Straits, which connects the Indian and Pacific Oceans. While it is not the only route that China’s PLAN can take in reaching other waters, the narrow stretch of water between the Malay Peninsula and the Indonesian island of Sumatra remains one of the most important shipping lanes in the world.

Nearly one hundred thousand vessels pass through the strait each year and carry more than 25 percent of the world's traded goods, including Chinese manufactured products, while about a quarter of all oil carried by sea now passes through the Strait.

H. I. Sutton, writing for Forbes.com this month noted that India is well-positioned to control the straits in the event of a crisis or war. Sutton quoted naval author Larry Bond, who told the Tac Ops podcast, “If India wanted to cut off trade with China, all that they have to do is park a bunch of ships at the Straits of Malacca. And that's it, nothing else is getting through that way.”

The Straits of Malacca pose another serious issue for the PLAN. The limits on the straits have a real impact on ship design, and those that are too long or deep for the narrow passageway must detour around Indonesia and sail through the Lombok Strait. That is a problem that doesn't impact India as much of its “blue water” navy can maintain control of the Indian Ocean.

One problem with China’s recent naval expansion is that it hasn't exactly made many friends in the process, and that could drive one-time rivals and even enemies closer together.

Last month India held naval exercises with Japan, one of the few countries that publicly supported India during the recent Doklam crisis. According to the Hindustan Times, this was the 15th such exercise in three years, and Japan's Maritime Self-Defence Force has become one of the principal partners of the Indian Navy.

China also has to contend with the navies of Taiwan, the Philippines, Indonesia, and Vietnam—and as the U.S. Navy has shown in recent weeks it is still very much capable of deploying two carriers, B-52 bombers, and much more to the region. That likely is quite welcome in the corridors of power in New Delhi.