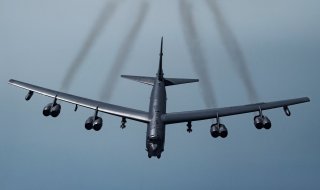 While many Americans were preparing to celebrate the nation’s birthday on July 4, the U.S. Air Force deployed a B-52H Stratofortress nuclear-capable bomber to Andersen Air Force Base in Gaum. The bomber, which is assigned to the 96th Bomb Squadron, 2nd Bomb Wing, was deployed from Barksdale Air Force Base—and had flown to Guam in a twenty-eight-hour mission and demonstrated the U.S. Indo-Pacific Command’s commitment to the security and stability of the region.

“Bomber Task Force demonstrates U.S. capability to rapidly deploy to a forward operating base and execute long-range strike missions,” said Lieutenant Colonel Christopher Duff, 96th Bomb Squadron commander as reported by the Defence-Blog. “This sortie demonstrates our ability to reach out from home station, fly anywhere in the world and execute those missions, rapidly regenerate from a forward operating base and continue operations.”

The arrival of the B-52H in Guam coincided with U.S. Pacific Fleet’s dual-carrier operations in the Philippine Sea, which included both the Nimitz and Ronald Reagan Carrier Strike Groups. This also marked the return of the heavy bombers to the region, after the U.S. Air Force announced in April that it would nix its six-month bomber rotations at Anderson Air Force Base in favor of “less predictable” global deployment. Since 2004, bomber patrols from Guam over the East and South China Seas had served as a means of projecting U.S. airpower in the region.

In April five B-52H bombers took part in an “elephant walk” show of force on the island before flying back to their home station at Minot Air Force Base North Dakota. The B-52s were lined up with six KC-135 Stratotankers, an RQ-4 Global Hawk long-range surveillance drone and a U.S. Navy’s MH-60S Knighthawk helicopter. Just weeks later the Air Force deployed B-1B Lancer bombers to the region in sorties that had the aircraft fly from bases in the continental U.S. including a thirty-two-hour flight from Ellsworth Air Force Base in South Dakota to the South China Sea.

During this past weekend’s flight the B-52H bomber’s aircrew tested and assessed command and control capabilities to inform the development of contested and degraded communication tactics, techniques and procedures to ensure seamless joint interoperability.

Last month two B-52 bombers were joined by Japanese F-2 and F-15 fighters and conducted operations near the Chinese border over the Sea of Japan. The aircraft conducted “intercept training” and long-range escort missions intended to replicate and prepare for warfare scenarios.

Despite the fact that the B-52 was developed in the early Cold War and entered service in the late 1950s, the aircraft could remain operational for decades to come. The aircraft have been steadily upgraded in over the past sixty years, and in late May the Air Force issued a Request For Proposal (RFP) for the B-52H Commercial Engine Replacement Program, which has called for responses by July and a contract award that is expected in June 2021. A total of 608 engines along with additional spare engine parts and support equipment are required, and the engines and parts are to be delivered over the next seventeen years—which can keep the bombers operational at least until 2050.