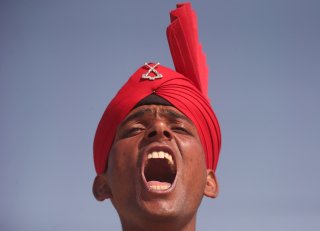 The potential for a border war that has been simmering at the Line of Actual Control (LAC) between India and China could reach a boiling point as hostilities increased on Monday night—which resulted in the death of at least 20 Indian soldiers.

Initial reports said that Indian Army Colonel B. Santosh Babu, along with soldiers Havildar Palani and Sepoy Ojha were killed in what Indian media has described as a “violent face-off” with Chinese troops at the Galwan Valley in Ladakh. The “massive escalation” occurred during efforts to defuse weeks of tension at the border that followed violent clashes involving dozens of men last month. The Indian Air Force even conducted sorties over Ladakh near the LAC after a scuffle between soldiers from the two nations.

Cooler heads had seemed to prevail until this week’s altercation.

Colonel Babu was the commanding officer of the Bihar Regiment, which was involved in the incident.

The three men were the first Indian causalities in a clash with China’s People’s Liberation Army (PLA) since 1975 when an Indian patrol was “ambushed” by Chinese forces in Arunachal Pradesh. Subsequent reports from the BBC and other outlets put the Indian causalities far higher, with at least 20 Indian soldiers killed.

“During the de-escalation process underway in the Galwan Valley, a violent face-off took place yesterday night with casualties on both sides. The loss of lives on the Indian side includes an officer and two soldiers. Senior military officials of the two sides are currently meeting at the venue to defuse the situation,” said an Indian Army statement as reported by New Delhi Television Limited.

Major General Abhijig Bapat, commander of the Karu-based HQs 3 Infantry Division reportedly met with his Chinese counterpart in talks at the site of the clash to defuse tensions.

According to various sources, all the deaths are the result of thrown stones and rods that were used by the soldiers. This would not be the first time that soldiers from both sides of the LAC have engaged in fisticuffs and used stones instead of missiles to attack each other.

The situation could be a bit more complex this time.

It isn’t clear if the Indian forces did in fact purposely cross the border with intent to do harm to the Chinese. The LAC is poorly demarcated, while the presence of rivers, lakes and snowcaps also means the line can shift. The region was the site of the Sino-India War in 1962, and while the western media largely have focused on the Kashmir dispute between India and Pakistan, China currently controls about 17 percent of the territory—making for a very uneasy situation.

Despite that however, the soldiers of both nations—which represent two of the world’s largest armies—haven’t fired bullets at each in four decades, and both sides maintain no shots were fired in this latest showdown.

The last major flare up at the LAC occurred in 2017, when the two countries clashed in the region after China tried to extend a border road through a disputed plateau. Even amidst this latest confrontation, New Delhi and Beijing have sought to calm the situation despite mutual suspicion.