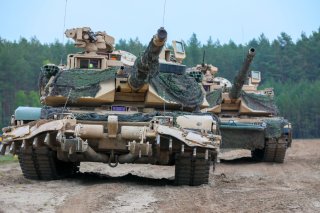 The United States is building a large new headquarters military base in Poland to house the U.S. Army’s V Corps as part of a massive, multi-faceted European force build-up announced by President Biden.

"In Poland, we're going to establish a permanent headquarters of the U.S. 5th Army Corps and strengthen NATO interoperability across the entire eastern flank," President Biden said, according to a Pentagon report on the NATO Summit in Madrid.

The forward headquarters will include a command post, garrison, and field support battalion. The units will also manage and oversee large stockpiles of forward-positioned weapons, platforms, supplies, and ammunition. The headquarters will have a steady, consistent rotation of forces. It appears the move may enable a long-term increase in force rotations through Poland following the initial plus up after Russia’s invasion of Ukraine. The new rotational force will include a large Armored Brigade Combat Team, a Combat Aviation Brigade, and a division headquarters. The overall approach is clearly aimed at strengthening the NATO alliance along its eastern flank.

The additional U.S. forces in Poland add great significance to the growing U.S.-Polish alliance. Not only is Poland now an F-35 stealth fighter customer but the country is also buying a large amount of U.S.-built Abrams tanks.  This massively helps interoperability between U.S. and Polish forces and places stealth aircraft and heavy armor within striking distance of Russia

Part of this Pentagon initiative will include sending rotational support units in Romania and what the Pentagon report called “enhanced” deployments in the Baltics. Missions in the Baltics will include “armored, aviation, air defense and special operations forces,” the Pentagon report said. The new units will support the “additional” 20,000 troops already sent to Eastern Europe in response to Russian aggression.

Deterring Russia has been a priority for the Pentagon for many years that has gained additional traction in NATO given how Russia’s invasion has changed the security situation in Europe. As far back as 2016, a RAND study raised concerns that a large conventional Russian force would be able to quickly take over the Baltic states, given the size of their armored divisions, tanks, and infantry. The study, which based its findings upon a series of elaborate wargames, recommended deploying additional forward U.S. Army forces. Of course, this study followed Russia’s 2014 annexation of Crimea and attacks in Ukraine. Following Russia’s invasion of Ukraine, however, international resolve to deter Russia has grown.