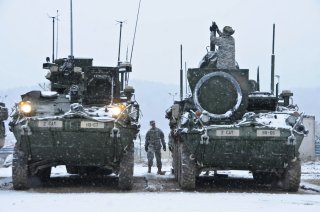 In a televised speech, President Joe Biden announced that some American forces in Europe would be positioned closer to Ukraine to help shore up NATO’s eastern flank.

The president explained that “in response to Russia’s admission that it will not withdraw its forces from Belarus, I have authorized additional movements of U.S. forces and equipment already stationed in Europe to strengthen our Baltic Allies — Estonia, Latvia, and Lithuania.”

The Pentagon concurred, adding that “[a]s part of our commitment to upholding the principles of the rules-based international order and to the security of our NATO Allies, the United States maintains significant combat-capable forces in Europe. These forward-deployed forces help to deter aggression and if deterrence fails, stand shoulder to shoulder with our Allies to maintain security and stability in Europe.”

Ratcheting Up of Tensions

The backdrop for the president and secretary’s statements is reflective of Russia’s troop buildup along Ukraine’s borders, one of the largest troop build-ups in Europe since World War II. Amidst poorly executed false flag operations aimed at promoting a narrative of Ukrainian aggression as well as fabricated reports from Ukraine’s border region with Russia, a Russian invasion into Ukraine appears imminent.

The Pentagon statement also explained that “Secretary Austin ordered the additional movement of U.S. forces currently stationed in Europe to continue our support for NATO Allies and the defense of the eastern flank.”

It also clarified location details, explaining that “these forces -- comprised of aviation elements and ground forces -- will move within the EUCOM Area of Operations to NATO’s northeastern and southeastern flanks.”

According to information from the Pentagon, these elements include: “An infantry battalion task force of approximately 800 personnel, from Italy to the Baltic region; Movement of up to eight F-35 Strike Fighters, from Germany to several operating locations along NATO’s eastern flank, A battalion of attack aviation -- 20 AH-64 helicopters -- from Germany to the Baltic region; And an attack aviation task force -- 12 AH-64 helicopters – will move from Greece to Poland.”

While the reshuffling of forces pales in comparison to the number of men and material Russian president Vladimir Putin has stationed around Ukraine’s borders, the move is a significant rearrangement of American forces in Europe.

Biden closed his speech by emphasizing the unity within the North Atlantic Treaty Organization, saying, “the United States and our Allies and partners remain open to diplomacy if it is serious. When all is said and done, we’re going to judge Russia by its actions, not its words. And whatever Russia does next, we’re ready to respond with unity, clarity, and conviction.”