Time to Turn the Tables on Vladimir Putin 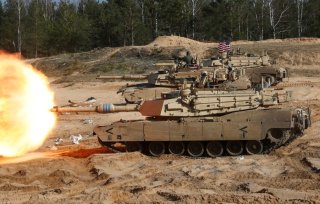 For years, Vladimir Putin’s detractors have been calling him a mere tactician, rather than the strategist that he is. How wrong they have been. He has positioned Russia in the eastern Mediterranean to an unprecedented degree. Russia now has a long-term lease on a Syrian airbase, Khmeimim, in addition to a new lease on the Tartus naval base, from which the Soviet Navy operated during the Cold War. He has maintained good relations with both Israel and Egypt; the former had no real relations with the USSR, the latter kicked the Soviets out in 1972. His oligarchs and others have flooded Cyprus with their ill-gotten gains. He has a friendly government in Greece.

And now he has consolidated Russia’s position in Europe, with the promise of doing even more. He has added the Ukrainian provinces of Luhansk and Donetsk to the list of so-called independent states—Abkhazia, South Ossetia, Transnistria—that only Russia recognizes. He has effectively absorbed Belarus into Russia’s orbit; it is now no more independent than Byelorussia was during the Cold War, its UN vote notwithstanding. Putin no doubt plans the same for Ukraine, which also had its own vote in the UN during the Soviet era.

It must be conceded that the manner in which Putin has gone about squeezing Kyiv is proving highly effective. In continuing to station some 300,000 troops around Ukraine’s borders, including about 50,000 in Belarus for an exercise that seems to have no end, he can both maintain constant pressure on Kyiv and deter it from taking any action against Donetsk and Luhansk. Moreover, he can always create a new pretext for biting off more of Ukraine—beginning with Mariupol and Odessa—whenever he so chooses.

At some point as well, he will absorb the two provinces into Russia, no doubt at the request of their leaders. Americans, in particular, should find such behavior hardly surprising. Texas broke away from Mexico in 1836, declared itself a republic that the United States recognized in 1837, and became the twenty-eighth state eight years later.

Putin’s “manifest destiny” clearly is to restore Russia’s Czarist glory. To that end, not only Ukraine, but Finland, the Baltic States, and Poland have good cause for worry. They were all part of the Russian empire in the eighteenth and nineteenth centuries; and apart from Finland, until 1918. Putin’s expansionist appetite differs from America’s “manifest destiny” in one critical respect. Whether Texas, or California, or any other state that entered the Union, it was the will of the population to do so. Neither the Baltic States, Poland, nor Finland have any interest in rejoining Russia. Nor do the Soviet Union’s former Warsaw Pact allies, all of whom are now well entrenched inside NATO.

The West is doing far too little to disrupt Putin’s playbook, however.  His argument that he is merely seeking to protect the residents of the breakaway provinces from the predations of Kyiv echoes Adolf Hitler’s demand for Czechoslovakia’s Sudetenland, supposedly to protect the Sudeten Germans. And just as Britain’s Neville Chamberlain and France’s Eduard Daladier acquiesced to Hitler’s demand, in order to achieve “peace in our time,” the West, led by the United States, is doing little more than to impose sanctions not on Russia itself, but only on Luhansk and Donetsk. For Putin, such sanctions are little more than a mosquito bite.

Ukraine’s president Volodymyr Zelenskyy has begged the West for far more weapons than he has received to date. Washington has thus far furnished Kyiv with Javelin anti-tank missiles, coastal patrol boats, Humvees, sniper rifles, reconnaissance drones, radar systems, and night vision and radio equipment. Other NATO countries have made smaller contributions; Britain has provided armored vehicles and some 2,000 short-range anti-tank missiles together with trainers. The Baltic States, who view themselves as most vulnerable to a future Russian assault, have provided Javelins as well as Stinger anti-air missiles, which Washington has yet to send. Poland is sending GROM anti-air missiles. Turkey has provided drones that were effective against Russian-backed forces in Libya and against Armenian unions in the latest flare-up in Nagorno-Karabakh. On the other hand. Germany refuses to provide any arms to Kyiv, sending only helmets and a military hospital.

The West and the United States should do more now. Washington fears that too deep involvement on the ground could bring on a war with Russia. Why should Putin not have the same fear? Biden should never have ruled out not sending forces to support Ukraine; surely its freedom is as important for Europe as ejecting Iraq from Kuwait in 1991 was important for international oil prices. Having determined not to aid Kyiv with American troops, the Biden administration should at least provide Ukraine with the additional arms it seeks. These include American helicopters, light armored vehicles, and communications systems; Norwegian SAMs; and Czech self-propelled artillery.

In addition, Washington, and NATO, should not only sanction the breakaway provinces but Russia itself. The current “wait and see” attitude leaves the initiative to Putin. Sanctions, especially on gas and oil supplies can always be lifted if Putin pulls back his forces. Such sanctions, coming on top of Germany’s suspension of its approval of the Nord Stream II gas pipeline, would bite Putin now and force him to react, instead of the other way round. For the past fourteen years, ever since Russia seized Abkhazia and North Ossetia, Putin has been playing a game of chicken with the West, and up to now has succeeded. It is time to turn the tables on him once and for all.