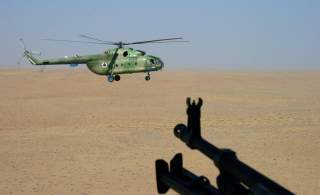 The Pentagon really botched a $7-billion effort to equip the Afghan military with UH-60 Blackhawk helicopters.

The American-made Blackhawks cannot fly as high or carry as much as can the older, Russian-made Mi-17s they're replacing. The Afghan military doesn't have enough technicians to maintain the aircraft. Paying contractors to fix the helicopters could cost billions of dollars -- and the contractors can't deploy to all the bases where the Afghans plan to base the UH-60s.

Those are some of the conclusions of the January 2019 report from the Special Inspector General for Afghanistan Reconstruction. The U.S. Defense Department "runs the risk of wasting U.S. taxpayer dollars to purchase aircraft the [Afghan military] cannot fly or maintain."

It didn't have to be this way. Experts years ago warned that the Blackhawk was the wrong helicopter for Afghanistan. The Afghans should stick with Mi-17s, the experts advised. "From an Afghan perspective, it makes total sense to maintain a fleet of Mi-17s that can be serviced regionally, or backups purchased regionally, or supported regionally," Matthew DuPee, a senior Defense Department South Asia analyst, told Stars and Stripes.

The helicopter fiasco comes as Pres. Donald Trump repeatedly has taken to Twitter to demand the United States withdraw its forces from Afghanistan, a move that Pentagon leaders have warned is premature as the Taliban and local terror groups gain strength.

Afghan forces for decades largely have flown Russian-made helicopters, which often are cheaper, tougher and perform better in hot and high conditions compared to American rotorcraft. "Easy maintenance, unsophisticated," is how Chuck Hagel, then the U.S. defense secretary, in 2013 described the Mi-17. "We can get it pretty quickly. That’s the one they want."

In 2013 the Afghan government bought new Mi-17s from Russia, boosting the Afghan fleet to 86 aircraft. "However, due to battle damage, excessive flying hours and U.S. sanctions against Russia that prohibit additional U.S. purchases of this aircraft and its spare parts, the fleet has gone from 86 aircraft capable of flying missions to 35 aircraft as of November 2018," SIGAR reported.

But the U.S. government funds many weapons programs on behalf of the cash-strapped Afghan government, giving American politicians an opportunity to influence decisions for the benefit of their own constituents.

In 2013 the U.S. Congress pressed the Pentagon to replace Afghanistan's Mi-17s with second-hand UH-60s. The Congressional delegation from Connecticut, where Sikorsky makes UH-60s, was particularly vocal. "I will continue to work with leadership at the Department of Defense to bring these contracts—and jobs—back home to Sikorsky and Connecticut," Rep. Rosa DeLauro said.

The Pentagon caved. "In addition to cost, [the Defense Department] selected the UH-60 because the aircraft is American-made and has an established, reliable logistics chain from U.S. sources, given the worldwide use of the aircraft," SIGAR explained. "Additionally, the refurbished UH-60s were available more quickly than new production aircraft and the procurement was scalable."

Critics cried foul. Mark Thompson, an analyst with the Project on Government Oversight in Washington, D.C., noted that a Blackhawk costs five times as much to maintain as an Mi-17 does.

What's more, the Mi-17 simply is the better helicopter for Afghanistan's mix of hot desert and high mountains. The Pentagon "has acknowledged that the UH-60 has performance limitations when compared with the MI-17, which can fly higher and carry more passengers," SIGAR pointed out.

Six years after the Pentagon decided to foist the Blackhawk on Afghanistan, the first of 159 rebuilt UH-60s began to arrive in the Central Asian country. In early 2019, the problems were already piling up.

"Based on the current UH-60 delivery schedule, it is unlikely that there will be enough pilots trained before all 159 UH-60s are delivered," SIGAR reported. The U.S. mission in Afghanistan "originally intended to train 477 pilots, but now plans to train 320 pilots over the next five years. The command may not achieve the 320-pilot target because the number of pilots going through training is already falling behind planned class sizes."

The Defense Department wants the Afghan military to handle all UH-60 maintenance starting in September 2025. But as of January 2019, Kabul had yet to begin training technicians. "Because it takes five to seven years to develop fully-qualified helicopter maintainers, recruitment and training would need to begin immediately for the [Afghan air force] to have trained maintainers available by 2025," SIGAR warned.

The Pentagon already has committed to paying private contractors to fix the helicopters through 2023 at a cost of around $3 billion. "This cost is likely to grow the longer it takes to develop the [Afghan] maintenance capabilities because."

Moreover, the U.S. military doesn't allow contractors to work at Afghan bases where there are not U.S. forces. "Lack of Afghan maintenance personnel limits the locations where UH-60s can operate," SIGAR explained, pointing out that the Pentagon's basing plan for the Afghan Blackhawks "includes locating six UH-60s in Shindand, Herat province, where there is currently no U.S. or coalition military presence."

If Pres. Donald Trump gets his way and U.S. forces leave Afghanistan, the Afghan military could be stuck with inferior helicopters it can't fix. "If the U.S. were serious about winning its 17-year war in Afghanistan, it wouldn’t be forcing the fledgling Afghan air force out of its simple and cheap Russian helicopters into costly and complicated American ones," Thompson wrote.