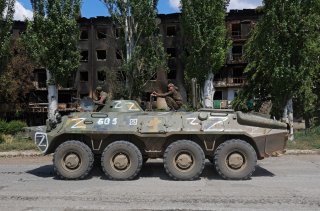 While the Pentagon is taking Russia’s "mobilization" of as many as 300,000 soldiers seriously, there are several reasons to think that its effects may not be as substantial as they first appear. During a background press briefing this week, senior Pentagon officials pointed out that a number of variables could weaken or diminish the impact of Russia’s mobilization.

“Just the mechanics of outfitting that size of a force is very difficult,” a senior official told reporters. Additionally, these forces will need to be equipped, trained, and armed for warfare, and many of them are reported to be conscripts with varying degrees of readiness. Pointing to open source reports indicating that Russian soldiers were being sent to Ukraine after “one day” of training, the senior official noted that "I just think about the level of training that we put into our own armed forces, and you know that is pretty inadequate.”

An even more impactful factor might be the question of morale. On this point, the senior official mentioned that there continue to be protests across Russia and what he called “concern from the Russian population” about the mobilization.

All of these factors are likely contributing to Russia’s continued lack of progress on the battlefield, as Ukrainian forces continue to make gains in the northeastern Kharkiv region.

“If you look at where the Russians are having problems, it’s really all over the battle space. So they’ve got a requirement to reinforce -- you know, in the north near Bakhmut in the center, as well as down in Kherson. So, a tough problem for the Russians,” the senior official said.

There is another tactical challenge facing Russian forces: large concentrations of Russian troops would make them more vulnerable to Ukrainian rockets and missiles. Force concentrations of Russian troops would be visible to Ukrainian surveillance and small-unit launched drones. Once detected, Russian troop positions would be vulnerable to precision-guided Guided Multiple Launch Rockets Systems able to travel up to seventy kilometers to strike a target.