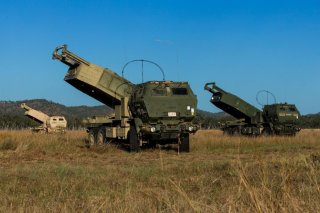 The Pentagon’s most recent $1.1 billion aid package to Ukraine reflects a gradual posture shift to support Kyiv over the long term.

The package was issued under the auspices of the Ukraine Security Assistance Initiative (UASI), a program that allows the U.S. government to sign long-term contracts with industry partners to produce weapons systems for the Ukrainian military. A close look at the equipment in the latest aid package suggests a pivot toward supporting offensive operations. The package contains eighteen High Mobility Artillery Rocket Systems (HIMARS) and two radars for unmanned aerial systems. Tactical vehicles and a large number of trucks and trailers to transport heavy equipment were also included, per the Pentagon’s press release.

The Pentagon announcement noted that the package contains 150 Armored High Mobility Multipurpose Wheeled Vehicles (HMMWVs), 150 Tactical Vehicles, and forty trucks and eighty trailers to move heavy equipment. The inclusion of tactical vehicles suggests that the Pentagon views them as essential to supporting Ukrainian mechanized advances to reclaim occupied territory, as well as for transport and logistics.

These vehicles can help Ukrainian forces establish a secure and reliable supply chain as they reclaim areas held by occupying Russian forces. Unlike the earlier phases of the wars, where Ukrainian forces were engaged in a defensive fight and reliant on dispersed mobile units executing hit-and-run tactics to stall, stop, or destroy Russian formations, the recent Ukrainian counteroffensive requires new platforms to sustain forward advances and hold territory.

U.S. and other Western officials have so far hesitated to send tanks to Ukraine, arguing that Ukrainian forces cannot be trained to use the platforms quickly and that it will be difficult to perform battlefield maintenance. However, Ukraine received 250 Soviet-era T-72 tanks from Poland this summer.