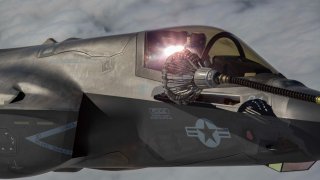 The Pentagon is making a targeted push to speed up its innovation, research, and development efforts to keep pace and stay ahead of Russian and Chinese modernization.

While this emphasis on modernization has been in place for many years, it is now being deliberately stepped up in the Pentagon’s 2023 budget for the clear purpose of implementing Defense Secretary Lloyd Austin’s Integrated Deterrence posture.

“[O]ur topline request for Fiscal Year 23 includes $276 billion for procurement and for research, development, testing, and evaluation – and that is across land, air, sea, cyber, and space – domains that must be netted together for integrated deterrence,” Hicks said, according to a Pentagon transcript of her remarks.

This strategy is not surprising, as the Biden administration intends to build upon the United States’ emphasis on science and technology during the Obama years when Pentagon and industry scientists pursued a “third offset” in breakthrough technologies. The impetus behind today’s efforts may be closely aligned with this thinking, as the research organizations with the Army, Navy and Air Force are now investing further in basic research likely to inform warfare capabilities in the 2040s and 2050s.

“Our first approach is integrated deterrence.  We seek to network our efforts across domains, theaters, and the spectrum of conflict to ensure that the U.S. military, in close cooperation with the rest of the U.S. government and our Allies and partners, makes the folly and costs of aggression very clear,” Hicks said.

The first offset is widely regarded as the dawn of the nuclear era in the 1950s; the second offset is discussed in terms of the advent of GPS and precision-guided weapons emerging during Desert Storm. What is the next paradigm-changing disruptive breakthrough technology or set of technologies? Artificial intelligence (AI), networking, sensor-to-shooter attack timeline advances? Perhaps some combination of all of these, as the services are making great progress leveraging AI for nearer term applications through the Navy’s Project Overmatch, Air Force Advanced Battle Management System, and Army Project Convergence.

These respective service programs are now being implemented into a Pentagon-led Joint All Domain Command and Control program that promises to leverage emerging technological breakthroughs. Further, it also leaves open the possibility of ongoing software upgrades, adjustments, and the integration of emerging technologies through the use of open architecture and common technical standards. In this respect, the Pentagon is working to align near-term breakthroughs with gains expected to emerge through longer-term basic research and new technologies that emerge over the next ten or twenty years.