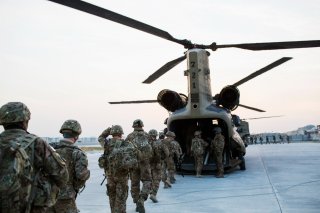 The U.S. Army is expanding its signature Project Convergence experiment to catapult the service into the future of warfare by dramatically decreasing targeting and “sensor-to-shooter” times.

Project Convergence 2022 will now incorporate international allies into the process. It takes little imagination to recognize what this might do for multinational attack operations. This concept is part of the inspiration for a newly signed “Feasibility Agreement” between the United States and the United Kingdom to collaborate on research, development, and concepts related to the Future Vertical Lift (FVL) program. Maj. Gen. Walter Rugen, Director of the U.S. Army’s FVL Cross-Functional Team, says the strengths offered by U.S. partners motivated the service to include allies in the upcoming Project Convergence 2022.

“The Army completed Project Convergence 2021, our largest Joint experiment in fifteen years, last fall … and this year [Project Convergence 2022] will include allied nations,” Rugen said. “Arrangements like these will ultimately improve our capabilities and strengthen our forces, focusing on joint lethality, survivability and reach, while ensuring affordability for both our countries.”

As part of this nascent agreement, in which both the United States and the United Kingdom will build on a long history of military collaboration, the two countries will explore how new technologies and platforms may reshape the future of warfare.

“They will also explore and analyze new concepts for the employment of coalition air power in the lower tier air domain, the air space where Army aviation typically operates,” an Army statement on the agreement says.

Advanced networks, a new generation of targeting and surveillance sensors, and innovations in the precision and lethality of weapons are all likely to play major roles in twenty-first-century combat. These technologies, coupled with a new generation of high-speed rotorcraft, will undoubtedly expand the battlefield and enable more dispersed and closely-networked multinational operations.