Philip Breedlove: Georgia Is a Success Story, but the United States Must Remain Engaged 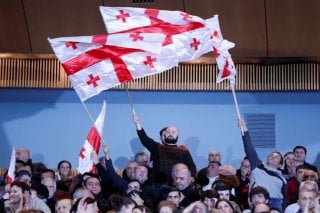 While all eyes in the United States are on the upcoming Nov. 3 election, more than 5,000 miles away in the South Caucasus voters in the nation of Georgia went to the polls on Oct. 31. Although the result came as no surprise, with a victory for the ruling Georgian Dream party, the election itself is an important reminder that Georgia continues to be a democratic success story.

Georgia’s success is important for the United States. It is a regional leader in democratic and economic reforms and a loyal ally and strategic partner that has contributed a substantial number of troops to every American military operation since 2003. The U.S.-Georgia military partnership is active and deep, and Georgia is a NATO aspirant country that provides forces for military operations without any caveats.

Moreover, at a time when the United States is increasingly re-evaluating its role and commitments abroad, Georgia is also a powerful reminder of what sustained American support can achieve. The United States has invested significant political and financial resources in Georgia, and it is essential that it remain engaged to ensure the success of a sovereign Georgian state built on democratic and free-market economic principles.

Georgia’s Oct. 31 parliamentary election, the first held under the country’s recently reformed electoral system, was open, transparent, and widely considered a success. With a total of 66 parties and 490 candidates on the ballot, 1.97 million Georgians voted for an overall turnout of 56 percent, according to the Central Election Commission.

With over 99 percent of the votes tallied, the Georgian Dream party had received 48.15 percent of the total, followed by the opposition United National Movement with 27.13 percent. Under the new electoral rules, approved in June, a party must win at least 40.6 percent of the vote to form a one-party government and the threshold for representation in parliament has been lowered from 5 percent to 1 percent. Several other parties cleared the new threshold as well.

The Georgian Dream party’s victory marks the first time in the country’s democratic history that a ruling party has been re-elected for a third term. It also represents a clear vote of confidence by the electorate for closer ties between Georgia and the West—most notably with the EU, NATO, and the United States—and a rejection of efforts by Russia to destabilize the country and undermine the electoral process.

While Georgia’s political dynamics are tense and the country is polarized, the political process itself remains vibrant. The media environment is open and diverse, and almost every political party in the country, and certainly all of the major opposition parties, has its own media outlet. These are often critical of the government’s point of view and express their opinions openly through multiple TV channels and other outlets.

The election came against a difficult global and regional backdrop, but the Georgian government has demonstrated a successful response to the coronavirus pandemic and capable management of foreign affairs, a particularly salient issue given the ongoing conflict between neighboring Azerbaijan and Armenia. Tbilisi’s offer to help facilitate conflict resolution over the disputed territory of Nagorno-Karabakh is noteworthy and was certainly appreciated in Washington.

As the Oct. 31 election has once again made clear, Georgia is a success story for democratic development and what long-term U.S. assistance can achieve. Georgia is on the right path and the United States has much to gain from its continued progress, but it must remain engaged going forward.

General (Ret.) Philip Breedlove is a retired four-star General of the United States Air Force and the Distinguished Chair of the Middle East Institute’s Frontier Europe Initiative. Highly decorated, he reached the pinnacle of the United States Military as one of six geographic Combatant Commanders and Supreme Allied Commander of NATO. During 39 years of service, he held a variety of demanding command and staff positions: Supreme Allied Commander Europe (SACEUR), Commander of US European Command; Commander, US Air Forces Europe and Air Forces Africa; Vice Chief of Staff of the Air Force; and Assistant Chief of Staff for Air Operations, Plans and Requirements.